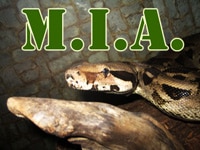 Oh boa, where art thou?

It was a quiet Tuesday night, about midnight. A couple of rats had been defrosting atop a warm gecko cage. All was well. (Or so I thought.)

I gave my ball python Xiaoyu her rat and went on to Damian the red-tailed boa’s cage to present him with his. With rat in hand I approached his cage, and then nearly dropped the rat on the ground. He wasn’t there! As I stood there with my mouth hanging open, a hundred things raced through my mind. When did he take off? Where could he be hiding? Why did I never get around to buying locks for his cage lid? How was I going to explain to my boyfriend that he had escaped?

While I was fairly certain of his presence when I had come home that evening, I was 100 percent sure that he was there the night before, as I always pass by his cage and say hello when I get home. This made his absence seem even more baffling.

I gingerly broke the news to my boyfriend, to which he angrily exclaimed, “That’s it! No more snakes, and that’s final!” With that, he went off to bed. I then began a brief hunting session, uncovering of course, nothing. Flashing back to when I had lost my python, I didn’t spend too much time looking, but instead started moving plants to relative safety. I even put a couple of them in the sink, to try and avoid total plant annihilation, like last time.

The next morning, very little was disturbed, only a couple of strategically placed strip light boxes, balanced on their ends, had been knocked over. Wednesday came and went and no other signs could be seen of this 7 pound, 6 foot serpent. It appeared as if my boa had taken on an undercover mission that I was not privy to. Once again, my condo had proven that it could conceal the largest of beasties without the slightest hint of their lurking presence.

It was not until Thursday night, while I was at work, when the snake finally showed up. I got a call from my boyfriend who said that he found him in the living room, behind the bamboo tree, coiled around a stack of magazines. My boyfriend then had to chase him around, as Damian “snaked” in and out of different things. Then he had to wrangle him into a snake bag, because he couldn’t get him back into his cage. Luckily, there were no injuries to my snake, boyfriend or any plants. I was also able to successfully feed Damian the next night.

I have now purchased locks for his cage that should contain him until I move him to his much larger final enclosure. While living at my condo, I will refrain from getting any new snakes, and have run out of space, anyway. But just wait until I move into a house … I’ll be unstoppable!