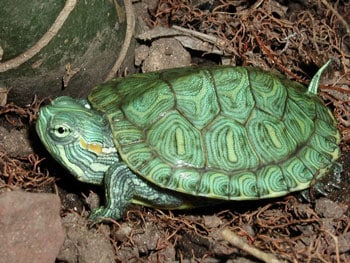 The sale of baby red-eared sliders (Trachemys scripta elegans) in small plastic aquariums in Los Angeles' Chinatown and Fashion District continues unabated even though the sale of turtles with carapace lengths of four inches or less has been illegal for decades.

According to Los Angeles Downtown News, the baby turtles can be found in many stores in the city's business districts with price tags ranging from $5 to $9 depending on the size of the housing in which the turtles are placed.

California Department of Fish and Wildlife spokesman Andrew Hughan told the paper that it is illegal for the stores to be selling the turtles and that the DFW conducts inspections sporadically in Chinatown and other business districts in the city and if they find stores that are not licensed to sell animals, or are selling turtles with carapace lengths of less than found inches, those animals will be confiscated. Store owners could also be fined up to $1,000 for illegally selling animals. The DFW, however, like most state departments in California, has had its budgets cut and doesn't have the resources to continuously police the business districts looking turtle vendors who violate the law.

Before the FDA amended the 1975-era turtle ban law (enacted to reduce the spread of Salmonella) last month, turtles found for sale with carapace lengths of less than four inches were euthanized. The FDA said that alternatives to destruction should be pursued, including raising the animals until the carapace lengths exceed four inches, and donating the animals for scientific and educational purposes.

The reality, Hughan said, is that other than a handful of surprise inspections a year, Fish and Wildlife lacks the resources to stay on top of the turtle vendors. However, should a violation be determined, Hughan said a fine of up to $1,000 can be imposed on the seller.

Red-eared sliders are one of the most popular pet turtles in the reptile hobby. They grow to about 8-10 inches in length and are native to the Mississippi River drainages and can be found in most areas of the United States, including the state of Hawaii. They are also found in many countries in Asia and Europe.