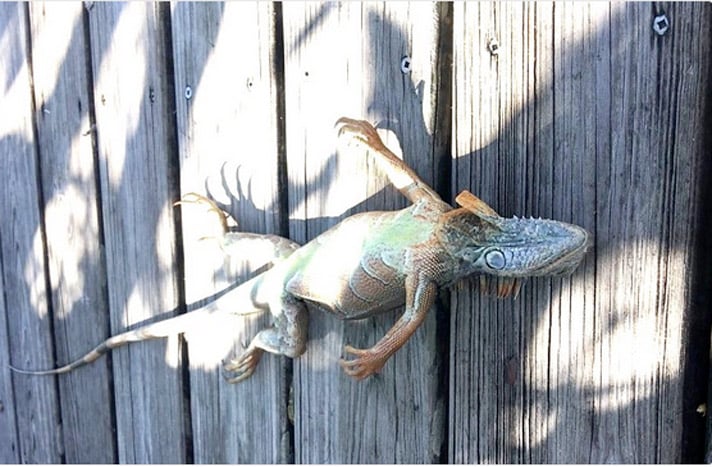 Iguanas Falling From Trees In South Florida Due To Extreme Cold

As the weather hits the 30s and 40s in South Florida, invasive iguanas start falling from their perches.

The Twitterverse is being inundated with photos from South Florida showing cold-stunned iguanas (Iguana iguana) just laying on the ground. The “bomb cyclone” that is hammering the East Coast of the United States with heavy snow and strong winds didn’t spare the Sunshine State, as folks in South Florida reported 40 degree temperatures and lots of cold-stunned iguanas and Cuban Knight anoles (Anolis equestris). 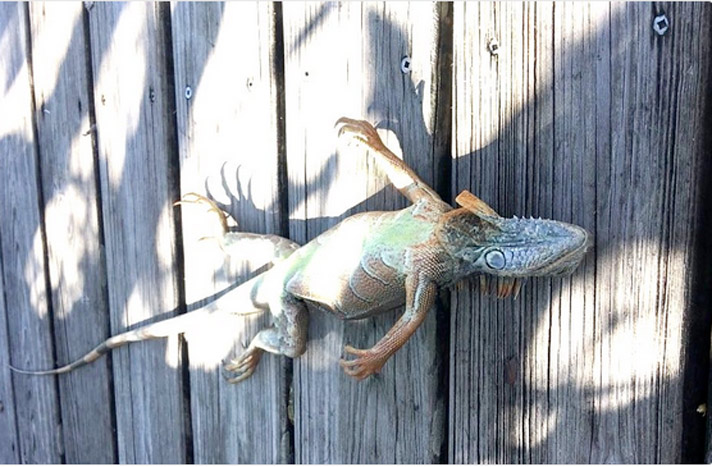 A cold-stunned iguana in south Florida.

Said the grown up Goob on Twitter:
“Florida is wild, man. Imagine walking down the street, you already annoyed because it’s way too cold and then an iguana *p l o p* falls out the tree and hits you.”

Another wrote :“Warning: if your dog brings a frozen iguana into your home, the iguana will warm up and run around the house.” #keyslife

According to the Florida Fish and Wildlife Conservation Commission, when temperatures hit the 40s and 50s, iguanas become sluggish. Then then lose their grip from the branches on which they perch and start falling from the trees. Palm Beach International Airport reported a temperature of 38 degrees this morning.

FROZEN IGUANAS – South Floridians aren't the only ones not used to this chilly weather. With falling temperatures also comes another unusual sight: falling iguanas. https://t.co/uxZXcwpfqg

Officials though say that the current cold weather won’t put much of a dent on the invasive species, unless the cold weather hangs around longer.

“Many pythons were reported dead, floating in the Everglades,” the FWC said in a statement at the time. “Although the iguana or python population may have some mortality occur, the length of time of cold weather may not be enough during this cold snap to make a significant difference.”

The iguanas have a good chance of thawing out if you move them in the sun. Just be careful @CBS12 pic.twitter.com/Qn2w6NFedD

So what you may encounter now is an iguana in a state of deep sleep brought on by the cold weather. As soon as it warms up, the reptiles will come out of their slumber.

The scene at my backyard swimming pool this 40-degree South Florida morning: A frozen iguana. pic.twitter.com/SufdQI0QBx