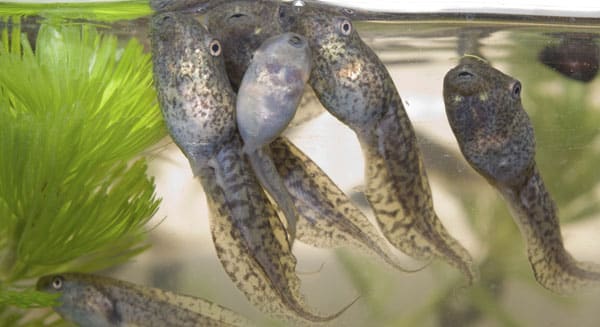 How Tadpoles Optimize Their Buoyancy

Tadpoles are well-equipped to adjust their buoyancy in the water.

Survival and reproduction of many aquatic and semi-aquatic animals can depend upon how well they float. Tadpoles use various strategies to attain buoyancy, depending upon their stage of development and location in still or turbulent waters. Scientists have now taken a closer look at the developing frog's strategies to achieve buoyancy.

Canadian-based researchers John Gee and Sylvie Rondeau studied eight species of tadpoles in three different environments-still waters, intermittent streams, and torrent sections of rivers. All species were examined in the larval and metamorphic stages, and three species were also studied in the hatchling stage.

How positioning in the water can be altered
The ability to float is determined by hydrodynamic lift and static lift. Hydrodynamic lift is generated by a difference in the velocities of a tadpole and the water around it. Static lift is the difference between the specific gravities of the organism and the water in which it lives. Tadpoles can alter their static lift by adding lung gas-for instance, gulping air at the water's surface-or by releasing lung gas.

Comparing buoyancy levels and how tadpoles achieve them, the researchers found that tadpoles of different species can adjust to different environments. In ponds and intermittent streams, lung gases offer tadpoles the flexibility they need to adjust to water depth, current speed, and ingestion of dense particles when feeding. When water currents increase, tadpoles can rapidly reduce lung volume and therefore gaseous lift and buoyancy.

In fast-flowing waters, negative buoyancy is favored. So species in such environments have no gaseous lift, but can maintain their position in the water using an oral sucker. These species often live in contact with the bottom where the water current is at its lowest.

The Impact of Different Life Stages
Transitions between hatchling, larval, and metamorphic stages also affect the buoyancy of tadpoles. It seems important to survival that buoyancy is neutral, or nearly so, as hatchlings become larvae because this facilitates locomotion. Another change in buoyancy occurs at the start of metamorphosis. At this time, buoyancy decreased in the majority of species that were studied, possibly in order to make the tadpoles less vulnerable to predation.