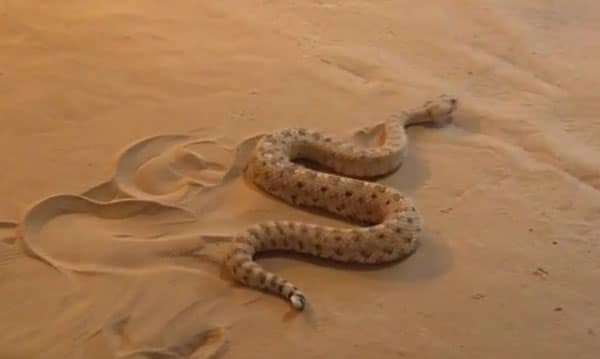 How Do Sidewinders Climb Sandy Slopes?

So just how does the sidewinder (Crotalus cerastes) climb sand dunes? It has perplexed scientists and herpetologists for years, but now a study t

So just how does the sidewinder (Crotalus cerastes) climb sand dunes? It has perplexed scientists and herpetologists for years, but now a study that looks at how the sidewinder slithers up sandy slopes has found the answer.

Researchers with the Georgia Institute of Technology, Carnegie Mellon University, Oregon State University, and Zoo Atlanta have published a study in the journal Science that says sidewinders are able to climb and crawl up and across sandy slopes by increasing the amount of their body area that comes into contact with the surface as they are climbing.

The researchers employed a robotic sidewinder snake and programmed it with a wave motion just like that of a sidewinder snake and it was able to traverse a sandy slope in the Red Sea as if it were a sidewinder. When just a single element of the motion was programmed into the robot, it was unable to climb. Before programming the robot sidewinder, the researchers had to understand the horizontal and vertical motion dynamics that the real world snake employs to move about the sand. 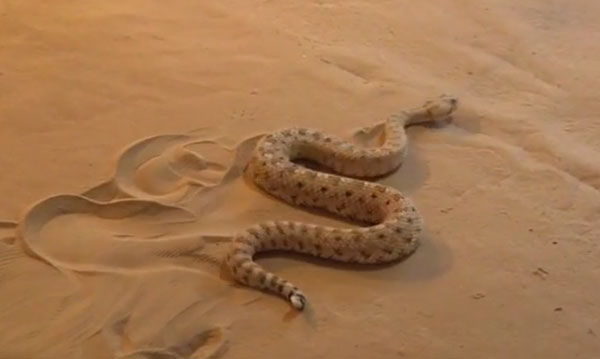 The motion of the sidewinder is akin to that of the tread on a tank.

"Our initial idea was to use the robot as a physical model to learn what the snakes experienced," said Daniel Goldman, an associate professor in Georgia Tech's School of Physics. "By studying the animal and the physical model simultaneously, we learned important general principles that allowed us to not only understand the animal, but also to improve the robot."

The robot snake is modular, is built with 16 joints, each arranged perpendicular to the last joint and is designed to pass horizontal and vertical waves through its body, just like the sidewinder, to move in three dimensional spaces. It is 3 feet, 1 inch long and two inches in diameter.

According to the paper, the snake’s motions are akin to that of the revolving tread on a tank. The snake’s body as a cylinder is always placing itself in front of another, and picking itself up in the rear, toward the tail. Some body segments are lifted by the snake as other parts of the body remain on the ground. As the slope increases, the cross section of the snake’s body flattens.

"The snake is one of the most versatile of all land animals, and we want to capture what they can do," Ross Hatton, an assistant professor of mechanical engineering at Oregon State said in a statement released by the university.  "The desert sidewinder is really extraordinary, with perhaps the fastest and most efficient natural motion we've ever observed for a snake.” Hatton studies the mathematical complexities of snake motion and how those motions can be applied to snake robots.