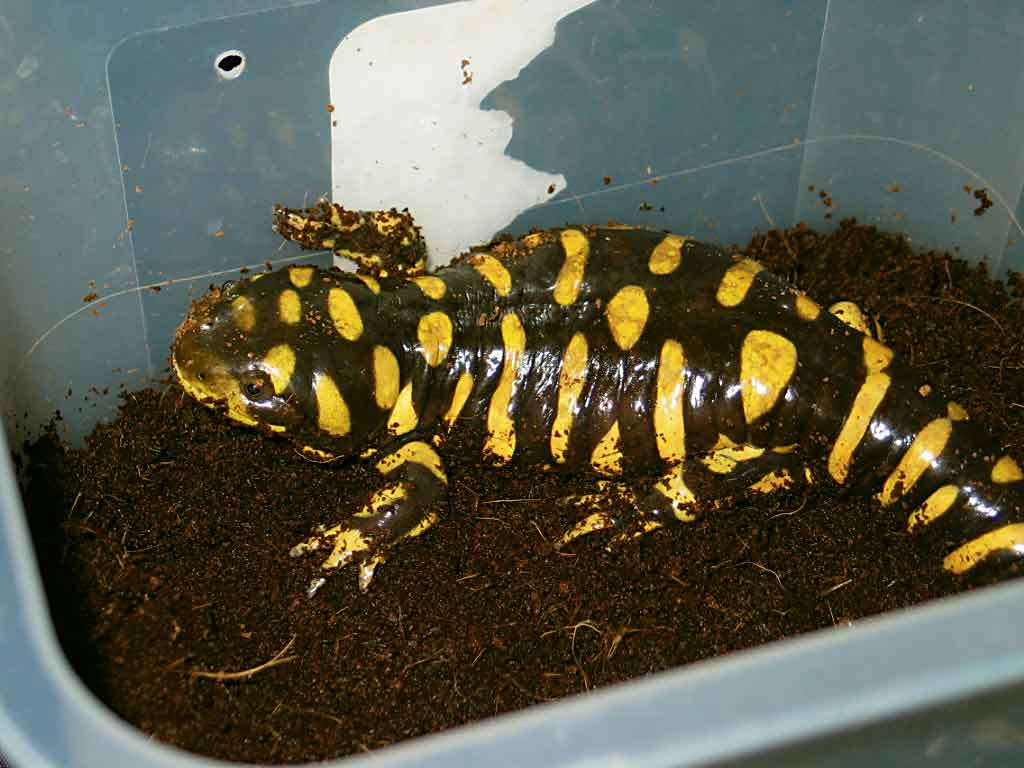 Amphibians have been dying from it, even going extinct from it worldwide, and it may very well be lurking undetected in your terrarium.

It is a microscopic fungus known as Batrachochytrium dendrobatidis (or “Bd” ). Belonging to the chytrid (pronounced kit-rid) fungi group, the devastating disease it causes is called chytridiomycosis.

The effect it has had on amphibian populations has been so great that the Association of Zoos and Aquariums is promoting a “2008: Year of the Frog” campaign in hopes of raising awareness.

In November of 1991, Dr. Don Nichols, a veterinary pathologist for the National Zoological Park in Washington, D.C., received three dead arroyo toads (Bufo californicus) from the University of California at Santa Barbara. In just two months, 60 percent of the university’s captive population of this federally endangered species had died from an unknown disease. Nichols’ analysis revealed that the toads were affected by a skin disease caused by microscopic organisms. Oddly enough, however, he couldn’t locate any information on these tiny organisms in animal disease literature.

Curious, Nichols next looked through the National Zoo’s veterinary records. There he turned up three similar cases of zoo frogs that died with skin disease. He reasoned that the disease might reoccur, so he and his pathology residents began to vigilantly collect skin samples from any dead frogs and toads in the zoo’s collection. In September 1996, an outbreak of skin disease killed several blue poison frogs (Dendrobates tinctorius [azureus]), green and black poison frogs (Dendrobates auratus), and White’s treefrogs (Litoria caerulea). Microscopic analysis of fresh skin samples revealed roundish, vase-shaped organisms with what looked like a little spout.

Nichols and Dr. Allan Pessier, who currently is at the San Diego Zoo, suspected a fungus, and they began a now-historic collaboration with chytrid fungus expert Joyce Longcore, Ph.D., of the University of Maine. Longcore’s work confirmed the organism was a species of chytrid fungus new to science. In 1999, Longcore, Nichols and Pessier described the organism in scientific literature, naming it Batrachochytrium dendrobatidis.

Meanwhile, herpetologists working on wild amphibian populations had been wringing their hands and scratching their heads for a decade. In 1989 the first World Congress of Herpetology was held in Canterbury, England. Participants presented papers and exchanged personal accounts of drastic amphibian population declines and disappearances. They concluded that an ecological crisis was in the making and that urgent action was warranted. 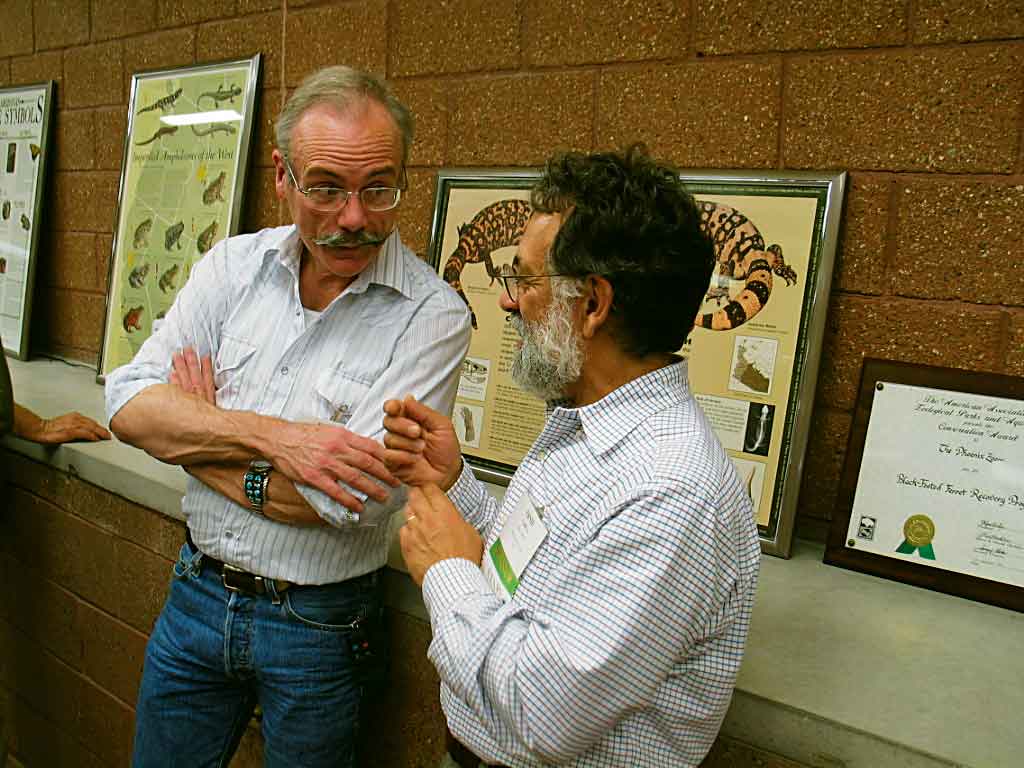 The largest numbers of threatened species occur in Latin American countries such as Colombia (209), Mexico (198) and Ecuador (163). The highest levels of threat, however, are in the Caribbean, where more than 80 percent of amphibians are threatened in the Dominican Republic, Cuba and Jamaica. A staggering 92 percent are threatened in Haiti.

These numbers haven’t gone unnoticed by herpetologists. “The level of recent and ongoing amphibian extinctions qualifies as a mass extinction event — on par with the extinctions of dinosaurs or the Pleistocene megafauna,” Joseph R. Mendelson III, curator of herpetology at Zoo Atlanta, said recently.

Half the world away in Australia, field biologists concerned about mass die-offs of Australian frogs delivered samples to pathologist Lee Berger, Ph.D., at the Australian Animal Health Laboratory in Geelong, Victoria. She collected DNA from the rounded bodies she detected in frog skin samples and noted that the genetics most closely matched that of chytrid fungi. At the time, the finding was perplexing because chytrids were not known to attack vertebrates.

At the Amphibian Conservation Summit held in Washington, D.C., in September 2005, more than 60 amphibian-decline experts concluded that though habitat loss is the greatest threat to amphibians, chytridiomycosis is clearly linked to amphibian population declines and species extinctions. Furthermore, some said this was the worst infectious disease ever recorded among vertebrates in terms of the number of species impacted and its propensity to drive them to extinction.

But what could people do about it? That was the question that recently brought nearly 200 amphibian enthusiasts together. 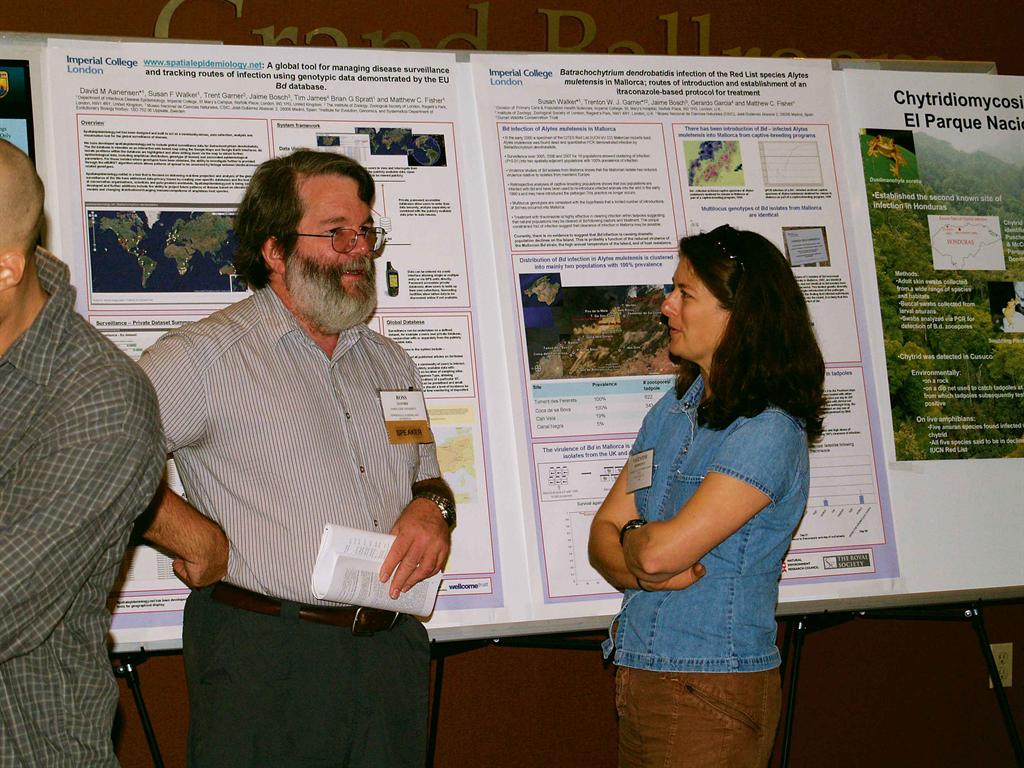 Ross Alford of Australia's James Cook University and Valentine Hemingway from the University of California at Santa Cruz discuss Bd during the poster session.

The first day of the conference focused on the state of scientific knowledge concerning Bd and how to monitor it in wild amphibian populations. Experts from around the world provided an overview of amphibian declines and shared information on the fungus’ biology and impacts. Case studies of population declines and species extinctions also were discussed. During one of the presentations, Che Weldon, Ph.D., of South Africa’s North-West University provided his thoughts on the origin of Bd.

According to an out-of-Africa hypothesis, Weldon and others believe Bd has been spread around the world via African clawed frogs (Xenopus laevis), a species exported from Africa in the 1930s for use in pregnancy testing. Other scientists point out that North American bullfrogs (Rana catesbeiana) — which have been traded around the world for frog-leg, biological-supply, bait and water-gardening markets — may also be a major culprit in Bd’s rapid global spread. Both species are resistant to Bd, but they can carry and transmit it.

The day concluded with a poster session in which 27 additional studies were presented. A video entitled Leap of Faith showcased innovative work being conducted in Panama under direction of the Houston Zoo, in which hotel rooms are serving as rescue facilities for Bd-threatened frogs. 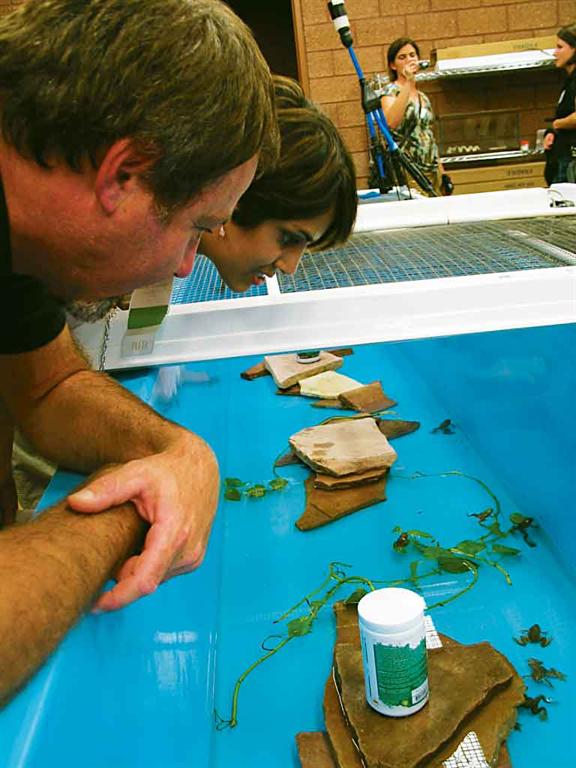 From left, Rob Fisher and Priya Nanjappa Mitchell gaze at endangered Chiricahua leopard frogs during a tour of the Phoenix Zoo.

On the second day, experts provided an overview of approaches to minimize the impact and spread of Bd, including case studies of on-the-ground conservation efforts focused on high-risk species.

Topics included the treatment of amphibians in captivity; field-based procedures for limiting the transmission of Bd; and education, policy and regulatory approaches. A number of speakers made reference to the Amphibian Conservation Action Plan, a comprehensive approach to amphibian conservation recently released through the World Conservation Union’s Amphibian Specialist Group.

Mat Fisher, Ph.D., of Imperial College in the U.K. and Dede Olson, Ph.D., of the U.S. Forest Service shared information on ambitious projects they initiated to map locations where Bd has and has not been detected around the world.

A presentation made by Russell Pouter, Ph.D., of the University of Otago in Dunedin, New Zealand, particularly encouraged participants. Pouter stated that he found the antibiotic chloramphenicol to inhibit the growth of Bd. He is working on an even more promising, more cost-effective treatment.

The day concluded with a visit to the Phoenix Zoo and a tour of its endangered reptile and amphibian collections. Among the animals observed was the Chiricahua leopard frog (Rana chiricahuensis). This critically endangered species native to Arizona is threatened by Bd. 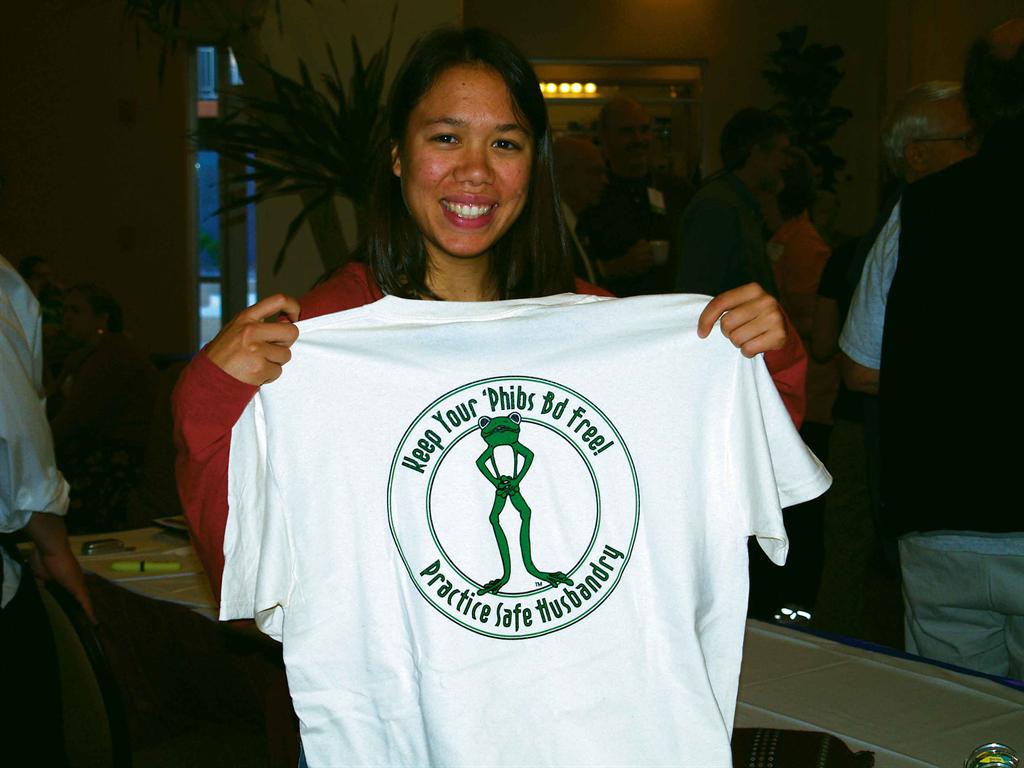 Natalia Woodward, an intern with PIJAC, shows her Bd-free T-shirt.

The final day of the conference was dedicated to developing initiatives to enable scientists, resource managers, educators, policy-makers and concerned citizens to take the urgent actions necessary to protect amphibians from Bd.

Cindy Carey, Ph.D., of the University of Colorado at Boulder led meeting participants through a discussion of what is known about Bd, what still needs to be learned about it (research priorities), and what tools need to be developed and shared in order to empower interested organizations and individuals to minimize the spread and impact of this highly invasive fungus. Examples of items in that “tool kit” include: fact sheets and other education materials, standard protocols for treatment and surveillance, a certification process for Bd-free amphibians, facilities for rearing high-risk amphibians, and more laboratories and funds to test for Bd.

Participants focused on developing conservation plans for Bd-infected amphibian populations, creating a standardized protocol for limiting the spread of Bd through field-based activities, reducing the spread of Bd through fisheries management practices, initiating a unified Bd mapping project and launching the “Bd-Free ‘Phibs” education campaign. The latter is particularly important to amphibian hobbyists.

Recognizing that amphibians are increasingly valued as companion animals and that the amphibian trade can serve as a vector of Bd, the Pet Industry Joint Advisory Council used the conference as an opportunity to launch the Bd-Free ‘Phibs campaign. The initiative is designed to educate the pet industry and others maintaining captive amphibians on the problems posed by Bd, and husbandry practices that can be employed to reduce its spread and impact. Bd-Free ‘Phibs is the only education campaign worldwide explicitly focused on Bd.

Conference participants responded enthusiastically to the campaign. They purchased approximately 100 T-shirts and pledged to become partners in program implementation. For example, representatives from the San Diego Zoo and PetSmart will work with campaign partners to develop standard quarantine, testing, disinfection and treatment protocols.

Donald Schultz of T-Rex Products was among those who attended the conference. “We are living in frightening times,” he said. “Amphibian decline and extinctions are becoming commonplace and increasing in frequency. Bd research and education need to be a priority for everyone, from the hobbyist to the breeder to scientists and the public at large. We should all be committed and proactive in these initiatives.”

1. Batrachochytrium dendrobatidis is a major cause of many amphibian population declines and species extinctions

2. Bd’s impact varies according to amphibian species, Bd strain and life stage, and geographic location (influenced in part by temperature and humidity).

3. Bd generally kills post-metamorphic frogs and toads. Infection in tadpoles is limited to their oral discs and is usually not lethal.

4. Widespread around the world, Bd is still spreading geographically and among various amphibian species.

5. Many amphibian species can get Bd infections, but some are more susceptible than others. They will die unless treated.

6. Amphibians resistant to Bd may still carry and transmit the disease with or without direct contact.

7. The zoospore, a roundish spore that moves by means of taillike flagella, is the life stage of Bd that causes the skin infection. It can persist in the environment and in amphibian terrariums.

8. Bd can be readily identified in the laboratory, and its entire genetic sequence is known. The strains of Bd around the world are closely related.

9. No vaccines are available for Bd, but under captive conditions some adult amphibians can be treated.

10. Any intentional or unintentional process that moves amphibians can contribute to the spread of Bd and other amphibian diseases. These include bait, pet, food and biological supply trades; fisheries work; zoo and university activities; and even conservation efforts.

How You Can Help

1. Spread the word, not the fungus. Learn more about  Batrachochytrium dendrobatidis and how to prevent its spread by going to ReptileChannel.com.

2. If you purchase, maintain or sell amphibians, do your best to ensure that they are Bd-free.

3. Never release unwanted captive amphibians into the wild and actively discourage others from doing so.

6. If you have amphibians tested for Bd, send the results to the mapping project, and write an account for the journal Herpetological Review. Contact Dede Olson at dedeolson@fs.fed.us.