You can trigger breeding in amethystine pythons by creating a temperature fluctuation. Commence during fall with a daytime shift from 86 to 88 degrees Fahrenheit to a daytime temp of 82 to 84 degrees and a nighttime drop that corresponds with this from 80 degrees to a drop to 74 degrees. Several snake breeders, including Yasser Moustafa, suggest using water to mist them down three times a day during this period, thereby simulating heavy rains. 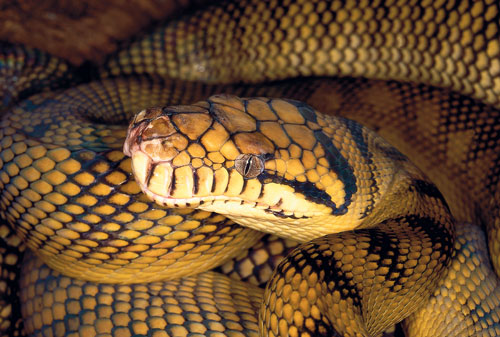 Amethystine python coloring ranges from a dark muddy-brown to iridescent green and pale mustard-yellow with bars either black or brown.

Males should be introduced to females’ cages at this time. Typical courtship, spurring and tactile alignment often follow. These pythons ovulate and develop follicles in the weeks after the initial cooling period commences.

With my pair of amethystine pythons I did not observe any mating activity whatsoever, and during the earliest part of the winter the female became somewhat notably fatter and basked for extended periods of time. I increased the heat to a daytime high of 86 to 89 degrees with a small nighttime drop to 81 degrees. These snakes are not necessarily very heavy-bodied. Because of this, they may be gravid even when they appear not to be.

I suggest removing the male at or before this point. By then he is famished and could use a small meal. Smaller meals can be digested faster and easier, and they result in increased growth as long as the snake is not overfed or pushed.

The female, meanwhile, may be ready to go into her pre-egg-laying shed, which typically commences approximately 35 days before actual egg deposition. During this time, amethystine pythons lay in typical python fashion: coiled with their belly inverted (facing up). Place them in a plastic nestbox measuring 24 inches long by 15 inches wide by 12 inches tall with the side partially cut away and filled with green sphagnum moss. Set nighttime temperatures at 85 to 86 degrees, and mist the cage several times daily. Often the snakes fail to even use the nestbox and prefer to lay their eggs directly on the cage floor. Why they do this I don’t know. Perhaps it’s to frustrate me.

Put eggs in an incubator with equal parts vermiculite and water. Close the incubator’s plastic top securely, and set the temperature between 87 and 89 degrees. Incubation takes 70 to 80 days. Open up the incubator and take the lid off the plastic box on a daily basis to allow air circulation.

Eggs will sweat and dimple during the days before hatching. I remove all eggs showing any fungus on them, yet other breeders have left these eggs in the incubator only to have them hatch with perfectly healthy neonates.

The number of eggs laid hinges on many factors, such as the size, maturity and health status of the female. Large females can produce anywhere from 20 to 25 eggs; smaller females produce smaller clutches and often don’t produce viable eggs at all.

Breeders often find that amethystine pythons less than 12 feet long either don’t become gravid or produce bad eggs. I believe it is a case of both age and size that determines whether a female successfully produces good eggs. In my opinion, larger snakes ranging between 4 or 5 years old are better. Minimum breeding size for adult females appears to be 7 feet, but because they are such a long snake at adult size, it makes perfect sense to wait until the female is in the 11- to 12-foot range before attempting to breed.

Offspring should be placed in small sweaterboxes measuring 12 inches long by 7 inches wide by 4.5 inches tall with a small rod or dowel running across them. Provide a water dish small enough so they drink from it but don’t climb in. Substrate consisting of all-white paper towel misted in the manner that green tree python neonates are often kept works well.

Neonates can also be kept in 10-gallon aquariums with a plastic hide box and water bowl. This box should be placed on heat tape controlled by a thermostat at temps of 87 to 88 degrees on the hot side of the box and 79 to 81 degrees on the cool side.

Amethystine python offspring are usually straightforward about accepting food items. However, several of mine refused anything for three weeks. Live pinky rats proved to be the most eagerly accepted food, and small fuzzy mice were a close second. These food items were offered to them via 10- to 16-inch-long hemostats, or they were left in the snakes’ separate containers overnight. Those not eaten by morning were removed. Either way produced similar results.

Neonates typically refuse food until they have their first shed, which usually occurs 20 to 30 days after they hatch.

Want to read the full story? Pick up the December 2008 issue of REPTILES, or subscribe to get 12 months of articles just like this.