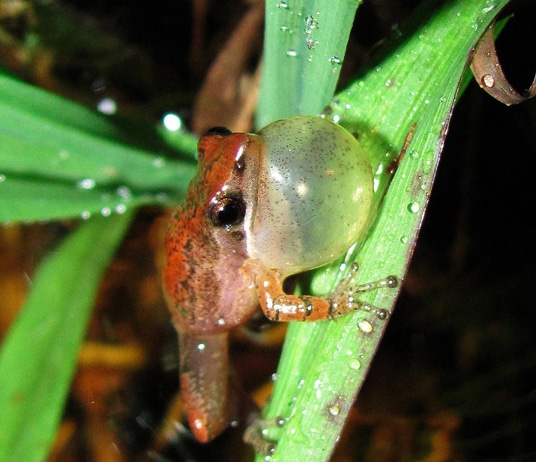 The tiny little grass frog (Limnaoedus ocularis) is indeed tiny. About a half-dozen can fit on a quarter, and one can rest quite peacefully on your fi

The tiny little grass frog (Limnaoedus ocularis) is indeed tiny. About a half-dozen can fit on a quarter, and one can rest quite peacefully on your fingernail if it chose to do so. Also despite being so minute they do sport a decent pattern, and make a pretty big noise as well!

Much easier heard than seen, they do have a call that is easily heard in the chorus of other frogs. They do lack the carrying-power of other species but within a hundred yards or so they are easy to make out, and are actually quite loud once you get right up close to them. Strangely I have known several people over the years who cannot seem to hear them, or at least make them out among the other sounds usually happening around them. They often have a lot of "background noise" around them such as other frogs, or in some cases the chirping of crickets and katydids, but to me they are not so high-pitched that they are difficult to hear 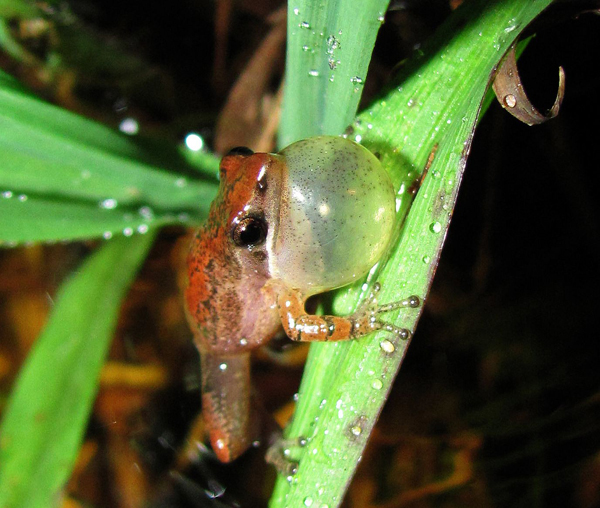 This is the tiniest species of frog in the United States, and is a delight to herp for.

My friend can even hear them over the phone, and on his end he describes the call as the clicking of the teeth of a comb. In reality it's a fast two-tone double-click that sort of goes "sit-SEE," often with just a slight trill. They can be heard in any month of the year in Florida, usually during times of heavy rains. Otherwise January and February appear to be their prime months for breeding, and can be heard even on drier nights during this time of year. 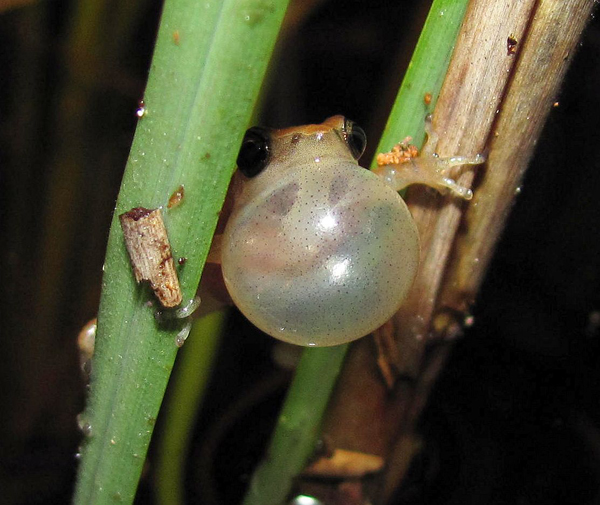 The clear skin of the expanded pouch allows for a clear view of the vocal cords within.

Even though they are designed for climbing and can often be found well above ground, they are usually seen clambering through low vegetation emerging from the water, where spotting them can be quite difficult, and are not usually seen until they move – and even then they are often mistaken for an insect until you take that second look! The marshy knee-high reeds and grasses at the edge of the marshes seem to be their habitat of choice. Spotting them on a warm wet night is usually not too difficult, once you train your eyes to see them! At first learning to recognize something so small among the backdrop of endless grasses and vegetation seems like quite a task, but once you have managed to spot a few the task becomes easier, and for photography you'll need your best macro.

The little grass frog is indeed tiny and will really put your macro ability to a test. Also they are master ventriloquists and judging direction and exact distance can be a real challenge. A warm wet evening will have them right up in plain view, but a chilly January evening will put them right down next to the water far beneath the literal "jungle" of grasses, and getting a camera down next to them is an impossible task.

These eat very tiny food, which they seek by making short hops through the grasses and clambering among the reeds and stems, and even an ordinary mosquito makes a real feast for them, as they seek tiny prey. They seem to avoid water as much as possible since they fall easy victim to such beasts as dragonfly nymphs and beetle larvae, which are probably the biggest threats to the adults. They often can be found in wide open fields where they live and breed in places that are seasonally rain-filled, and drying of their breeding location probably costs them some offspring, but the adults seem to pull through two-month droughts beneath a blistering sunshine without any problem, and the night following a big thunderstorm it's back to business as usual. 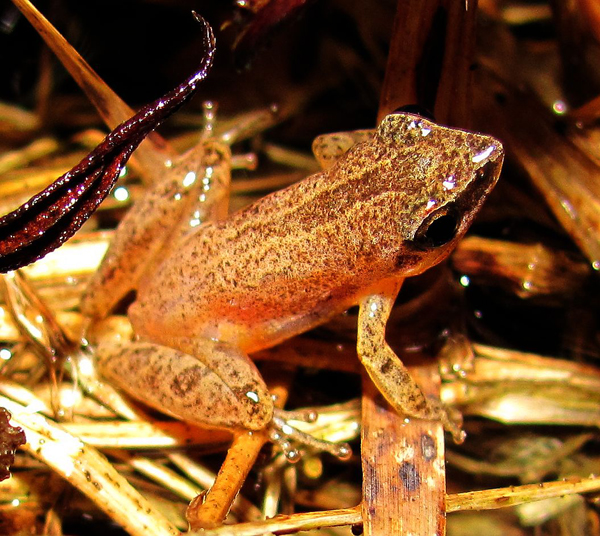 This tiny but well-patterned frog seems to hold its own through heat and drought.

As for breeding, the calling male is approached by a female in the usual fashion, and after a short acrobatic scuffle amplexus takes place and they may remain there among the reeds for the next hour or so before the female leads the way to the base of a small clump of grass in inch-deep water to lay small clusters of tiny eggs. The tadpoles are very tiny and if it wasn't for the sheer numbers produced the species would be in peril, and despite their tiny size they hold on quite well in an otherwise harsh habitat with so many potential enemies. Also these are more active in the daytime than others, and during a warm overcast day following a night of rain they will call freely both day and night, while the other Hylas (treefrogs) have all fallen silent until the following night. 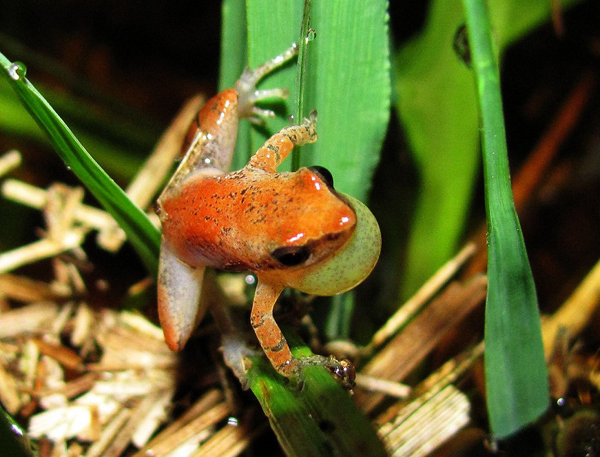 Spotting the little grass frog on a warm wet night is usually not too difficult, once you train your eyes to see them.

I won't even mention the captive keeping of these since they are so small and dainty, and they would need a meal of fruit flies. There are many other species out there that are much better, as well as much easier for you and your guests to see in your terrarium when they come to visit. Also concerning managing habitat for these on your property, if you have a colony, keep them happy by keeping trees from overtaking the small wet areas in which they breed, since wooded areas are usually lacking the grassy vegetation necessary for them, but in the large vast wetlands that occupy much of their range, they usually hold on quite well since there are areas there where the sunlight is plentiful. 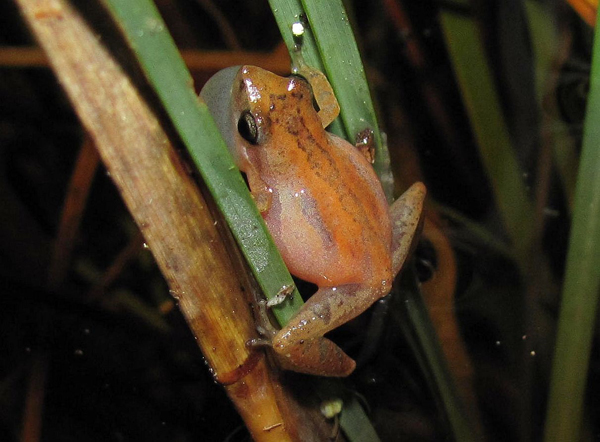 Right at home here in the grasses and reeds.

"Nature" Joe (Myers) is a nature photographer, and has been an active field herper since the late-1970's, and working with groups of people of all ages in an outdoor educational setting since 1986, and can be followed on Facebook https://www.facebook.com/n.joe.myers where his nature photography and time-lapse videos can be seen publicly.