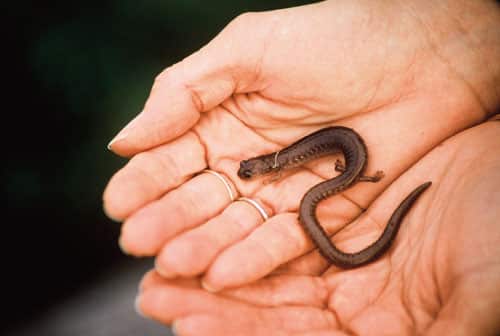 A trove of herps awaits on California's Channel Islands.

Living in Southern California, I’m well aware of side-blotched lizards that frequent the Mojave and Colorado deserts, and particularly Joshua Tree National Park. When I began leading kayak tours at the Channel Islands National Park – 11 to 45 miles off the coasts of Ventura and Santa Barbara, Calif. – I was surprised to see them scampering across the cobbled volcanic shores of Santa Cruz Island and on the marine terrace of narrow Anacapa Island. I asked myself, “How did they get all the way out here?” 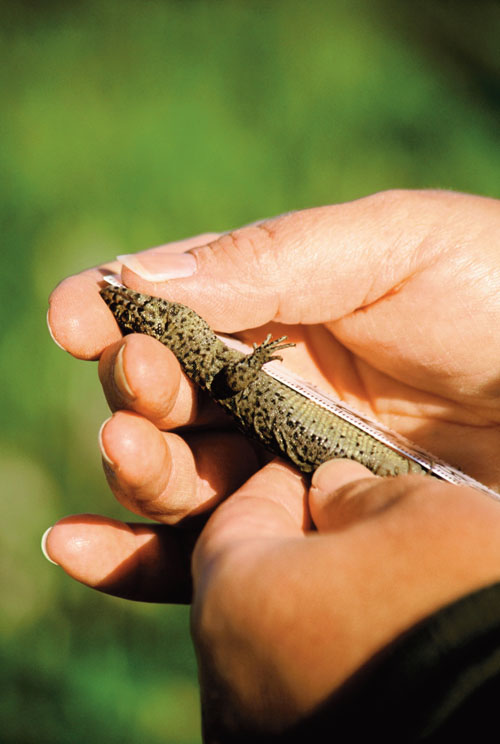 Of course, one could ask that about most of the terrestrial animals on the craggy archipelago, everything from island foxes, spotted skunks and deer mice to the reptiles and amphibians on each windswept island. However, before a chain of islands existed, there was one super island called Santarosae. At the time, the channel crossing from the mainland was roughly 5 miles across. At the end of the last Ice Age, sea levels rose, and the chain was formed, reaching its present size about 2,000 years ago. “There’s no geological evidence of a mainland connection to that island since the Miocene Epoch,” explained Charles Drost, a biologist for the United States Geological Survey. “The main methods that animal species like reptiles and amphibians used to get to the island was either by rafting or by human transport. 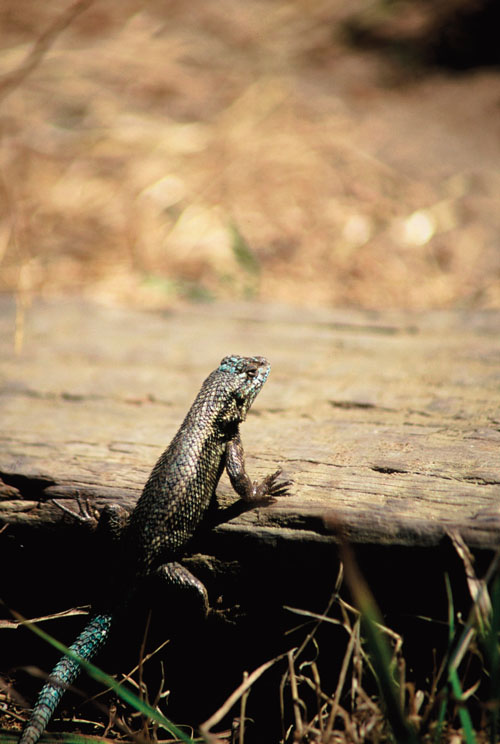 During the early Pleistocene, southern California and northern Mexico were much wetter, and flooding was more common. Throughout history, there are some amazing accounts of animals found at sea, adrift on kelp rafts or storm debris – the kinds of things that still get washed out of southern California rivers today. The Chumash Indians were a maritime culture and paddled their tomols (dugout canoes) to and from the islands. They lived there for 10,000 years, up until their removal by the Spanish mission system in the mid-1800s.

“(Such crossings were) probably much more extensive in the past,” Drost said. “You figure it only has to happen once or twice if you get a female out there with eggs.”

So I set out to see what I could find on my own. I kayaked around all five islands in the national park, managing four of the northern islands in one, 175-mile trip. Those include Anacapa, Santa Cruz, Santa Rosa and San Miguel islands. Tiny Santa Barbara Island lies further to the south, and I paddled that islet on a separate occasion. 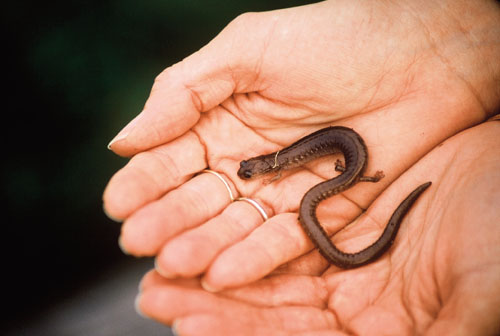 When I heard there was a secretive lizard on Santa Barbara Island, 40 miles off the coast of Los Angeles, I jumped at the chance to assist a National Park Service biologist on a survey of the island night lizard (Xantusia riversiana). The survey is conducted each year because the island was used for ranching in the mid-1800s to the mid-1900s, drastically reducing night lizard habitat. It’s currently listed under the Endangered Species Act as threatened. 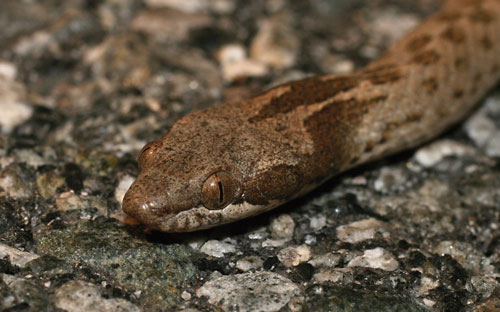 The night snake (Hypsiglena torquata) was last recorded on Santa Cruz Island in 1939.

It’s believed that Santa Barbara Island was formed by underwater volcanic activity. It’s the smallest of the Channel Islands. San Nicholas and San Clemente islands further south also have island night lizards, but those islands are owned by the military and are not open to the public. Santa Barbara Island is the only place most people can see the lizards, and you won’t find them scampering across the trail or basking on rocks. The only time I saw them was under pieces of wood left by biologists specifically for their surveys. I couldn’t help but think that it was a miracle for a night lizard to survive such a long crossing on a debris raft and just happen to land on a one-square-mile island. “It stretches the imagination a little bit,” Drost said.

Black rats once overran this narrow islet, arriving via the wreckage of more than a dozen shipwrecks, the most famous being the Winfield Scott from San Francisco in 1853. For 150 years, the rats feasted on a bevy of rare seabirds that come ashore for a few short months each year to nest and raise their chicks. They also ate alligator lizards (Gerrhonotus multicarinatus multicarinatus), the more abundant side-blotched lizard (Uta stansburiana), and the island’s only amphibian, the Pacific slender salamander (Batrachoseps pacificus pacificus).

One of the best hikes to be found on all the islands is the riparian corridor within Lobo Canyon, located on the east side of Santa Rosa Island. A year-round freshwater creek flows to the ocean, feeding the canyon and all its various inhabitants.

In 2002, the NPS put an end to black rat dominance and eradicated them off the craggy islet. Not without controversy, though. First, a slew of biologists trapped as many native species as possible, including sea and land birds, mice, reptiles and salamanders. Then they dropped a rodenticide in the form of pellets. There was collateral damage, as some native species died off, as well, but all the black rats were gone.

In 2003, the restoration project was complete and the island was deemed rat-free. The species that were trapped were released back on the island, and today they’ve replenished the volcanic isle. 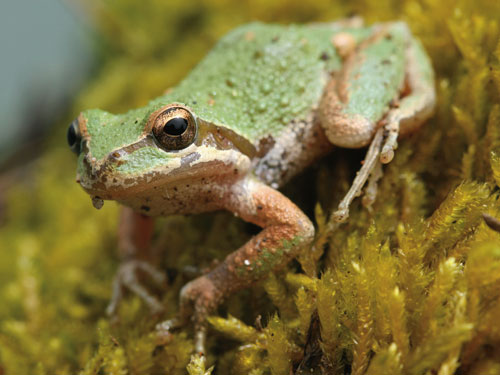 Pacific tree frogs can be heard calling along the author’s favorite Channel Islands hike, along a riparian corridor in Lobo Canyon on the east side of Santa Rosa Island.

Sitting under a cypress tree, I waited for the morning sun to creep over Santa Cruz Island, warming up the cove known as Scorpion Anchorage. Coves are places for safe boat anchorage on the southeast end of the largest of the Channel Islands. I was hoping for another island fox (Urocyon littoralis santacruzae) sighting, particularly three siblings that bounded through the canyon daily.

Island foxes are excellent tree climbers, and these three were no different. They leapt down from above, buzzing by me to the other side of the shaded canyon. I followed the tiny, house cat-sized foxes like I did the three previous mornings. Fortunately, as they ascended the steep slope, they stopped each time they discovered something of interest. This time they found something I’d never seen before after so many trips to the mountainous island. A yellow-bellied racer (Coluber constrictor) had become a play toy for the foxes. Like everything else they found, they quickly became bored and bounded off, continuing across the marine terrace.

On another day trip across Santa Cruz, I was fortunate to have an island gopher snake (Pituophis melanoleucus pumilus) slither in front of me across the trail, as I traversed a steep slope toward Cavern Point. With non-native grasses covering much of the island, it has been my only encounter. There is only one collection record on Santa Cruz from 1939 of the night snake (Hypsiglena torquata).

Bulrushes stretching 6 feet tall choked the gurgling creek. Gnarled island oak trees draped in colorful lichen hovered above a spring canvas of yellow coreopsis, island poppies, seaside daisies, Indian paintbrush and island buckwheat that swept across the sandstone canyon. What rounded out this perfect island hike was the melodious tune straight out of the creek. A bevy of Pacific tree frogs (Hyla regilla) turned up the volume in harmony with the creek and ocean colliding on a sandy beach at the bottom of Lobo Canyon. 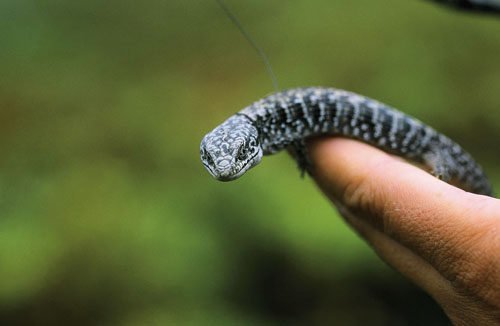 On the way back to camp, I came across my first alligator lizard (G. multicarinatus) on what is known as the Smith Highway. Sunning itself at the end of the day, it hugged the historic cattle road without fear. To preserve endemic species, the cattle have long been removed from Santa Rosa Island.

I arrived on the westernmost island in the chain weary from paddling into a strong northwesterly wind. I landed my kayak at Cuyler Harbor, grabbed my gear and ran up the 11/2-mile canyon to the campground.

As I bounded toward the marine terrace, my pace created an impact tremor causing an endemic subspecies of western fence lizard (Sceloporus occidentalis) to leave its basking spot. It found a dead coreopsis stump to bask upon, and it gave me a chance to observe the physical features that differentiate it from its mainland cousin. Fence lizards on the islands are a deeper blue and their scales are more spiked around the neck.

As I paddled back to Santa Cruz Island, the deep blue water was riddled with whitecaps. It is 3 miles from San Miguel Island to Santa Rosa Island, then 18 miles of coastline before crossing the Santa Cruz Channel, one of the most dangerous channel crossings on the planet. At least I was in a kayak and not relying on a piece of driftwood to float me to a land unknown.  REPTILES

Chuck Graham is a freelance writer and photographer from Carpinteria, Calif. The Channel Islands National Park is his favorite place to explore.