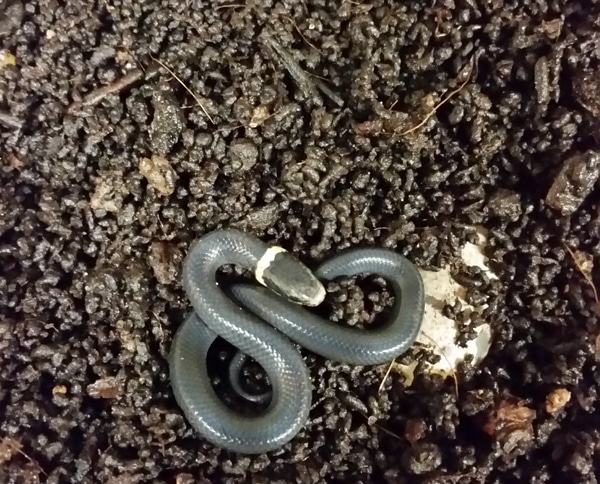 Ringneck snakes are a common, yet spectacular snake found throughout much of North America

“Come in Reptile Mike,” I heard crackle over the radio. I’m one of 834,946 Mikes that work at the Turtle Back Zoo in West Orange, New Jersey. So over the radio I answer to Reptile Mike. I’ve been called much worse.

“Gopher Mike,” I said, giggling to myself.

“We need a reptile ID at the giraffe construction site.”

“Be right there.” I trudged over, preparing myself to see a garter snake with its head several feet removed only to tell the shovel operator it was in fact not a cobra-conda trying to bite him in the gnarblies, but a harmless woodland friend now dead. I have been to way too many of the “kill first, brag that you did something awesome,” type of snake IDs to expect much different any more. I was pleasantly surprised this time. 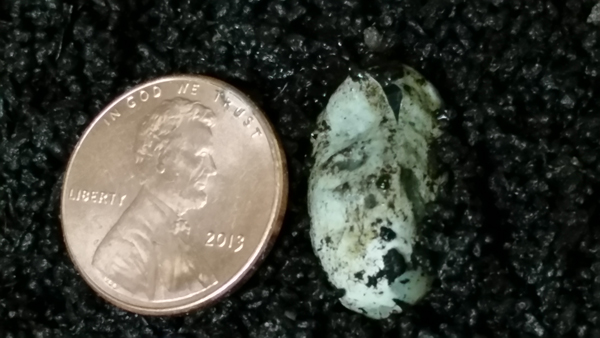 Ringneck snake egg and a penny for reference.

A new giraffe exhibit is being built and during the initial construction, a cinder-block retaining wall had to be removed. The monster earth-moving machines had all stopped and several dudes in hard hats were gathered around the half demolished wall. The workers took it down, brick by brick until one of them noticed a clutch of mystery eggs inside one of the blocks. Maybe it was the hot July afternoon that inspired the guy to take a break or maybe he was just curious or dare I say, just maybe he was a nice guy concerned for the well being of the little embryos. Whatever it was, instead of tossing the eggs away, squishing them with a stick or just ignoring them, the thoughtful construction worker flagged down the nearest zoo keeper.

I elbowed my way through the crowd to find a bunch of jellybean sized eggs laid neatly inside the crack of a beastly cinder block. I have to admit, I was stumped as to what they were. Although based on the local species, I figured it out after a few minutes but kept the mystery going for fun. I’ll explain that later. 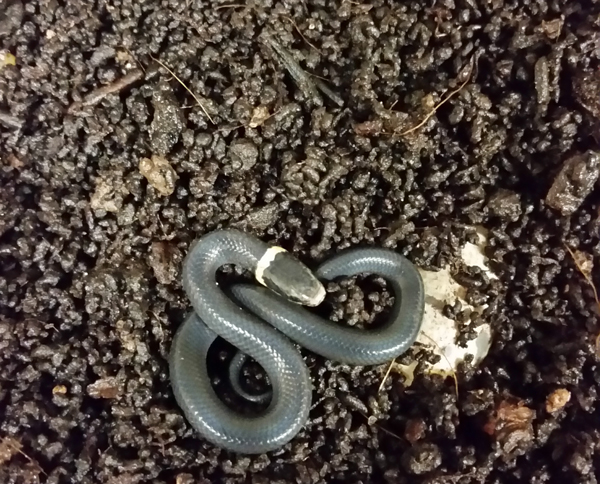 First, I had to figure out how to incubate the eggs. There was no way to safely remove them from the block. The embryos of reptile eggs stick to the top of the shell shortly after being laid and need to remain in the same position until they hatch. So I had to leave the eggs in the block. This was no regular block, either. It was huge and oddly shaped. It took at least two large sized zookeepers (or one regular sized construction worker) to move it. I had to get it to the reptile building (to a quarantined room so as not to spread any cooties to the collection). Then I had to incubate the entire cinder block. It would take some serious redneck engineering. 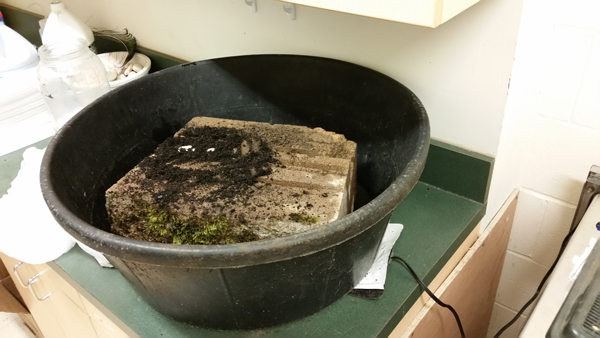 The ringneck snake eggs were found attached to this cinder block.

The block wouldn’t fit into my sad Styrofoam chicken egg incubator. It wouldn’t even fit into an over-sized cooler. I had to keep it hot (about 85 degrees F) and damp. I found a huge rubber tub used by some of the large mammals. It was made of recycled tires and held water nicely. The block fit perfectly in the bottom. I took a heat pad and placed it underneath, added about an inch of water to the bottom and covered the whole thing in a clear trash bag. After a couple of hours I could adjust the temp by adjusting the amount of heating pad that touched the bottom of the tub.  The room stayed a fairly constant temperature so the ring-cubator (trademark now, explanation later) worked well. I covered the exposed eggs with worm dirt and let it cook for several weeks.

During that time I let the mystery fester. There were so many people that came up to me every day and asked what the eggs were and when were they hatching. They all got different answers, some I’m quite proud of. As the days went on, I’d hear what the answers morphed into. Some people figured out that I was messing around. Others, particularly the docents, would believe just about anything.

If you haven’t ever talked to a docent at your local zoo, you’re missing out on some of the best people around. Docents are volunteers. They have some extra time and want to spend it educating people about the animals. They don’t do it for pay or recognition or even to pad their resume, but just for the joy of helping. They are generous and trusting people. Thankfully, they are also very forgiving because all great qualities aside, they are also fun to mess with. Often, I’ve found if you follow up a ridiculous answer with a ridiculous explanation, many people don’t question it at all. Here are some of the answers I gave to the question, “What kind of eggs are they?” All of the answers I gave were wrong. Some of them were so wrong I just wanted to see what I could get away with. SO MUCH FUN!

Cotton Mouth (which actually give live birth and don’t live in New Jersey)
Hump Backed Skink (They knew what skinks were, just not that invented species.)
North American Banded Water Cobra (Totally made up, but if you add “North American to the front of a name, then for some reason people believe you.)
Sarlacc (Just Google that one.)
Left-handed North American Banded Water Cobra (I deserve Tony award for that one. I explained that they only go to the left due to having a bent tongue instead of forked. This somehow made sense to one particularly sweet docent.)
North American Tuatara Nymph (No idea what that is, just sounded good.)
Hoop Snake (This is a legendary creature that was said to bite its own tail and roll down a hill in the form of a hoop. I once offered a guy $10,000 to bring me the hoop snake he swore he had in his yard. Amazingly, I never saw him again).
Scorpion Turtle (They deposit their eggs with a scorpion like tail into the ground.)
Compsognathus (Long extinct small dinosaur.)
North American Left-handed Scorpion Turtle (I was caught. But the nice lady let me explain that they only lay eggs on the left side due to a bent egg stinger instead of a forked one. See what I mean about the docents being wonderful people? She just let me keep going then winked knowingly at me after I was done.)

Finally the eggs began to hatch! Still wondering what the mystery reptile is? Diadophis punctatus (the ringneck snake)! I must say they were one of the more adorable snakes I’ve ever witnessed pipping from the egg. Ringnecks can lay up to twelve eggs and have been known to have communal clutches. I’d never heard of that until I did a little research. 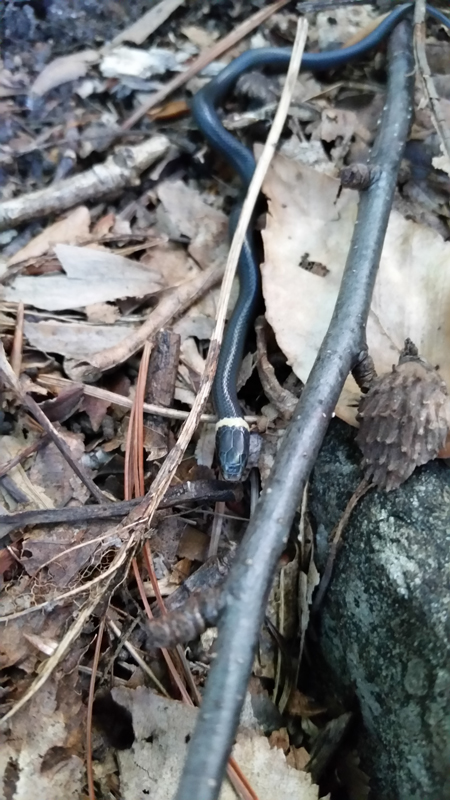 The snakes are grey in color with a bright orange belly and a loud yellow-orange ring around their neck. They mostly eat worms and sometimes small salamanders, slugs and occasionally other small snakes and lizards. Adults reach a size of 10 to 15 inches. They are a common, yet spectacular snake found throughout much of North America. If you do much field herping, you’ve probably come across several of these little guys under logs, rocks or in damp leaf litter.

Every one of the nine eggs hatched. The best part is that none of the people I messed with minded once they saw how spectacular the actual animals that came out of the eggs were. They were also excited for the happy ending. After showing the little cutie critters off for a day, I released them back into the wilds of New Jersey, hopefully they will live long, happy lives, crawling to the left.

Michael P. Wines is an author, woodworker, and herpetologist focusing on Eastern Indigo Snakes (Drymarchon couperi). He is about to start a career as a keeper at the Turtle Back Zoo in West Orange, New Jersey. If you enjoy his writing, his first kid’s novel, Stupid Alabama, was published by Ardent Writer Press and he desperately wants you to buy it. It can be found on Amazon.com.