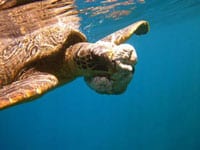 Hawaiian turtle had 8.5-pound tumor on side of its head

Dr. Morris has worked with the sea turtle program out of the Makai Animal Clinic Kailua, Hawaii for more than 15 years.

“I knew there would be a lot of bleeding from a previous removal of a five pound tumor on another turtle in the same area,” Morris said. “Tying off bleeders is difficult in this area because part of the bone is invaded.”

George Balazs, a sea turtle biologist at the NOAA’s  Pacific Islands Fisheries Science Center, said the surgery to remove the tumor was only the second in Hawaii in the past nine years.

Hawaiian sea turtles (honu in Hawaiian) are a threatened species and are protected under federal law. The sea turtle was released post surgery into the ocean near Maui.