Paleontologists with North Carolina State University have just published a paper detailing their findings of a giant turtle fossil in 2005 that is believed to be the largest side necked turtle species on record. According to a press release put out by the university, the shell of the freshwater turtle, Carbonemys cofrinii, or coal turtle, was discovered with a smaller fossil of the specimen in a Colombian coal mine. Its shell measured 5 feet 7 inches in length and lived approximately five million years after the dinosaurs walked the earth. This puts it living in the same time frame as Titanoboa cerrejonensis, the largest snake discovered on record, as well as other giant reptiles. The 60 million year old fossil also shows that the side necked turtle had powerful jaws that enabled it to eat a variety of things, from mussels to smaller turtles and crocodiles. 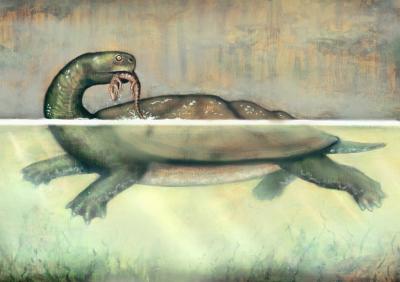 Reconstruction of Carbonemys preying upon a small crocodylomorph

According to the report, the ecosystem in which it lived at the time probably provided the resources needed for the turtle to grow large; factors such as plenty of food, a better climate, wider range, and fewer predators. The turtle's modern day environment would resemble a warmer Orinoco or Amazon River delta. Only a single specimen this large has been found to date. Scientists believe that such a large turtle probably ate all of its competition in its range, which would have to have been very large to sustain it.

The paper was published in the Journal of Systematic Palaeontology.