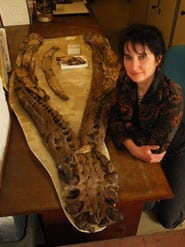 Pliosaurus fossil had degenerative condition in its jaw.

Working with an ancient sea reptile called pliosaur, which swam in the world’s oceans more than 150 million years ago, University of Bristol scientists have discovered evidence of a degenerative condition resembling human arthritis in its jaw. It is the first time that a disease of this type has been identified in a reptile of this age. 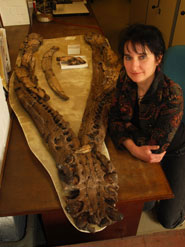 Dr. Judyth Sassoon with the lower jaw of the Westbury pliosaur. Image by Simon Powell.

A Formidable Predator
This particular member of the pliosaur group was discovered in the vicinity of Westbury in Wiltshire, near the university, which is located in the west of England. It was found in rocks dating from the Upper Jurassic. The pliosaur, measuring about 26 feet overall, was a truly formidable predator.

It had a large head, similar to that of a crocodile, with a powerful neck and a body not dissimilar to that of a modern-day whale. Pliosaurs could swim very fast, thanks to its four powerful flippers along the sides of its body. With its huge jaws, measuring 6 feet in length and full of powerful 8 inch teeth, it would have been capable of ripping most other marine reptiles or dinosaurs to pieces.  Although this particular specimen was handicapped by disease.

Dr. Judyth Sassoon was immediately drawn to this specimen when she saw it at the Bristol City Museum and Art Gallery. She noticed that it had the signs of a degenerative condition, not dissimilar from human arthritis, which had eroded its left jaw joint, displacing the lower jaw over to one side.

It is clear that this pliosaur survived with its deviated jaw for possibly some considerable time, as there is clear evidence that the teeth in its upper jaw were regularly impacting on the bone of the lower jaw when it fed, confirming that it could still hunt effectively. Nevertheless, this injury appears to have ultimately contributed to its demise.

Impact of age?
As to how the reptile obtained this injury is unclear, although it might have been linked to its age. The fused state of the skull bones and its overall size suggest that this was a mature individual, and, according to the researchers, it may have been female. This suggestion is based on the height of its skull crest, which is quite short. It is thought that males probably had a taller crest.

Sassoon explains: “In the same way that aging humans develop arthritic hips, this old lady apparently developed an arthritic jaw, and survived with her disability for some time. But an unhealed fracture on the jaw indicates that at some time the jaw weakened and eventually broke. With a broken jaw, the pliosaur would not have been able to feed and that final accident probably led to her demise”.

Pliosaurs as a group caught their prey unaware on occasions, but equally, they could often run quarry down, thanks to their swimming abilities. They are believed to have hunted fish, squid and other marine reptiles that were swimming in the oceans back then, being the dominant predator in the marine environment at that stage. It is unclear how this particular pliosaur met its end – it may have been killed by another of its own kind, or could have died naturally.

Professor Mike Benton, a collaborator on the project, notes: “You can see these kinds of deformities in living animals, such as crocodiles or sperm whales and these animals can survive for years as long as they are still able to feed. But it must have been painful.

The pliosaur from Westbury is an amazing example of how the study of disease in fossil animals, described as paleopathology, is now helping us to reconstruct an extinct animal’s life history and behavior, confirming in this particular case that a Jurassic killer could succumb to the afflictions of old age.