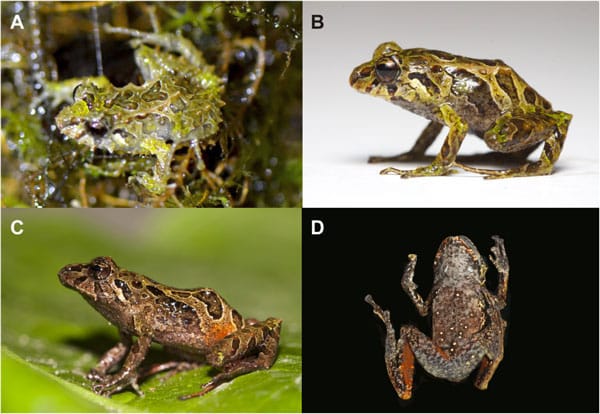 The amphibian world has a shape shifter in Pristimantis mutabilis, a small frog that was discovered in a nature reserve in the Andean cloud forests of

One Direction Turns Itself Into The Frog Band Pond Direction
Túngara Frogs Mating Calls Also Attract Predators
The Vet Report: At The First Sign of Illness, Take Your Reptile to a Vet

The frog is just 23 mm in length and is mottled green and brown in coloration. It was first discovered in 2009 and when researchers Katherine and Tim Krynak of Case Western Reserve University first spotted it, its skin was spiky and standing up in certain spots, like a dried leaf. They collected the frog in the cup for further study. However the next day, when Katherine, a Ph.D student at the university went to further examine the frog, it appeared like a normal frog with smooth skin. Perplexed, Katherine placed the frog back into the cup and added some moss and the frog did its transformation, adding the spikes. She then pulled the moss out and within 3 minutes, the frog went back to looking like a normal frog.

The researchers found yet another frog during the course of their study, Pristimantis sobetes which also has the capability to change its skin texture. The full study is published in the Zoological Journal of the Linnean Society.