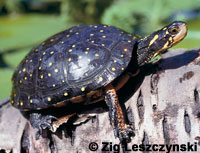 The Florida Fish and Wildlife Conservation Commission had its first hearing on April 15, 2009, and moved forward a proposed rule that prohibits the commercial sales of wild-caught native turtles. Although the regulation stops wholesale collecting of turtles for the food or pet trade, it allows for captive breeding for the pet and meat markets. It also allows individuals to take turtles (possession limit of one per day) for personal use except for state protected species. In my opinion this is one of the best rules the FWC has produced in some time. It is well balanced in that it realizes the small numbers required to support captive breeding should not affect wild populations. It also allows kids to catch their own pet turtles.

By not allowing wild-caught Florida turtles to be sold, species like the spotted turtle (Clemmys guttata) and various species of box turtles protected in all or most of their ranges can no longer be listed as coming from Florida. This has been sad and amusing at the same time. There are a total of about 20 Florida records of spotted turtles from only a handful of locations. Yet going through reptile classifieds one might find that many adult breeders from Florida on any given day. In reality, these wild-caught adults come from North Carolina and other states where they can be found in large numbers in certain places.

The rule will go through a number of public hearings over the next two months before it goes back to the Florida Fish and Wildlife Conservation Commission for final consideration in June. During this period, I encourage people to write in to FWC in support of this draft rule or to comment on two key points. First, one issue that I supported at first but now think should be changed is the “Look Alike Clause.” This clause protects the Florida snapping turtle because it looks like the protected alligator snapper. Also, because the Suwannee cooter looks a lot like Florida cooters, red-bellied turtles and a couple of other hard shelled turtles, they all are protected from take. The reason is that both enforcement officers and the lay public may find it hard to identify these species and may mistake a protected species. Well, the point here is the old adage, “ignorance is no excuse” when breaking the law. If you are going to collect turtles, you should know them. Buy a good field guide and become aware of their markings, and there is no excuse for an enforcement officer not to be trained or not have reference materials at hand to be sure they know what species they are dealing with.

The second issue that needs to be changed is the clause limiting the time that breeders can take stock or eggs out of the wild before there will be a complete moratorium. This was directed at the highly consumptive soft-shell meat producers. My recommendation is that permitted captive breeders can apply for a permit to obtain certain numbers of turtles to supplement their breeding stock. Breeders are already permitted and have to provide lists of animals in stock. Breeders should be marked by microchip or permanent scute marking so that individual animals can be tracked, including if they are transferred to other breeders.

I think that this new rule will help save the folks that like to see stacks of turtles sunning on logs as they canoe and kayak down the rivers, or have grandkids like I do and want to teach them the thrills of catching a turtle off the bottom of a river while snorkeling. Meanwhile, they can purchase turtles that are far better suited as pets from captive-bred stock and raise them up to turn over to their grandkids twenty years later. All of these excuses for human interactions are the underpinnings of support for conservation in the future.

Email your comments to Bill.Turner@MyFWC.com or Ken.Hadad@MyFWC.com, or write Dr. Ken Haddad, Executive Director, FL Fish & Wildlife Conservation Commission, 620 South Meridian St. Mail Station 2A, Tallahassee, FL 32399-1600. If you want to attend one of the public hearings, go to MYFWC.com to get the dates and locations.