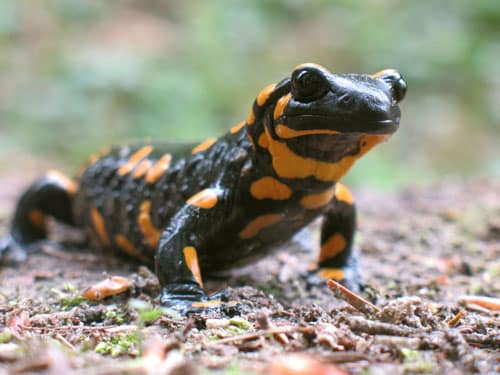 The beautiful fire salamanders of the genus Salamandra can be found across mainland Europe and on some Mediterranean islands, as well as in parts of northern Africa, and even the Near East. The fire salamander Salamandra salamandra was the first salamander to be described formally to science, hence the scientific name. This species is comprised of many races that are classified as subspecies, and in the U.S. pet trade, the three races most commonly encountered are, in order of frequency, S. s. salamandra from Eastern Europe, S. s. terrestris from central and western Europe, and S. s. gallaica from the western half of the Iberian Peninsula.

The vast majority of fire salamanders available in the U.S. are eastern European imports. Under European Union law, fire salamanders are strictly protected throughout all of the EU countries, so importers resort to collecting wild specimens from countries such as the Ukraine and its neighbors. These fire salamanders often reach the U.S. in poor condition, so try to see any you may be considering before you make a purchase.

Fire salamanders generally arrive in the spring, and the females are heavily pregnant at that time. Many online vendors know this, and they will attempt to sell the offspring that are produced shortly after importation as being captive bred. Obviously this isn’t truly the case, so buyer beware. There are a few specialist fire salamander breeders in the U.S. who can be reached through specialist salamander forums online. Vendors of wild-caught animals typically charge $50 or more per salamander. Hobbyist breeders selling genuine captive-bred animals charge similar prices for their juveniles. 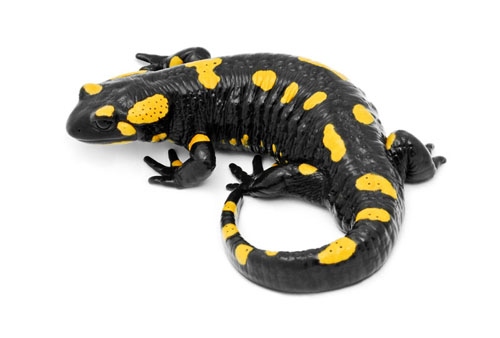 The fire salamander was the first salamander to be formally described, hence the scientific name Salamandra salamandra.

Compared to other mature terrestrial salamanders, the fire salamander is one of the largest. Sizes vary between species and subspecies, but individual fire salamanders can be 5 to nearly 12 inches in length.

Fire salamanders may easily attain 10 years of age under the care of most keepers.

At its most basic, a fire salamander terrarium may consist of a plastic shoebox containing a bottom layer of unbleached paper towels that have been moistened with amphibian-safe water (more on that later) and a hide, such as one of the bark tunnels sold in pet stores for reptiles like the Zoo Med Habba Hut. Unlike many salamanders, fire salamanders do not burrow, and provided they have a hide spot such as a bark tunnel, they will do well in these Spartan accommodations. They may even breed in them.

That said, I believe the hobbyist’s goal should be to approximate natural amphibian habitats in a fire salamander enclosure as closely as possible.  A layer of 2 inches of moist topsoil that is free of artificial additives makes an ideal substrate or reptile bedding. Fire salamanders inhabit deciduous and mixed forests; consequently, a layer of leaf litter makes for a more natural environment. Each salamander should have a hide spot available to it, such as the aforementioned bark tunnel, or one of the molded plastic hides that are commonly available in pet stores that sell reptile supplies.

A 10-gallon terrarium should be considered the minimum size for a pair of fire salamanders, with 20 gallons being a more comfortable size. Adult fire salamanders do not climb well, so a lid is not essential for them, but youngsters are better climbers. Plus, because pet cats and dogs may be poisoned if they bite down on a fire salamander, so a reptile lid is still recommended. It will also help retain humidity inside the terrarium.

Like most salamanders, fire salamanders of the genus Salamandra are primarily nocturnal. However, most pets eventually become habituated to being fed during the day and will usually come out to greet their keepers during daylight hours. In my experience, fire salamanders do not tolerate strong lighting well, tending to hide in such conditions. If you wish to grow plants in your fire salamander terrarium, consider using a daylight spectrum bulb, such as those sold for freshwater aquariums. Put it on a timer so it is only on during midday.

The most challenging aspect of keeping fire salamanders, at least as far as the U.S. hobbyist is concerned, is the low tolerance shown by these salamanders for temperatures much above 70 degrees Fahrenheit.  Salamandra s. salamandra and S. s. terrestris frequently show signs of stress—including a lack of appetite and poor skin condition—at temperatures above 74 degrees. If you live in a southerly state in the U.S., you had better hope your air conditioning doesn’t fail during the late spring or summer. Fire salamanders from southern Europe and the Near East tend to be more tolerant of warmer temperatures, but even these will not tolerate temperatures of 80 degrees or more for more than a few days at a time. 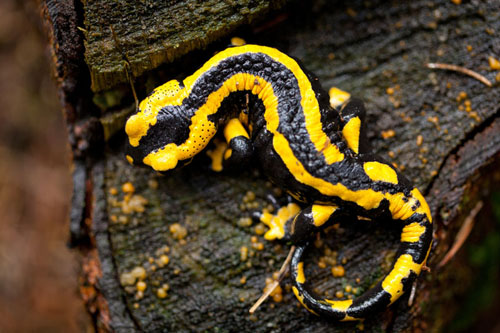 The beautiful coloration of the fire salamander makes it a highly desirable pet to amphibian enthusiasts.

Red wrigglers are not as readily accepted as night crawlers, but fire salamanders can become used to these less-palatable worms over time. Crickets, waxworms, and mealworms will also be taken, but wax worms and mealworms are not complete foods and should be fed sparingly.

Feed adult fire salamanders two to three times per week, and juveniles every one or two days. For both, my old reliable rule of “feed as much food as will be eaten in 15 to 20 minutes” applies.