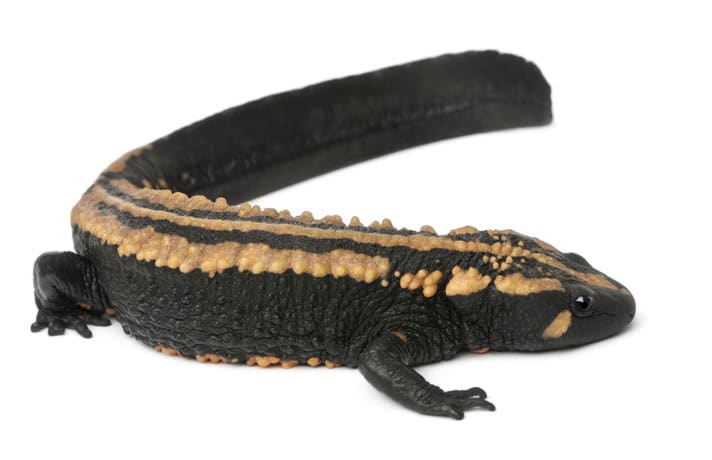 With proper care, warty newts can live 10 years or more.

Warty newts of the Genus Paramesotriton consists of ten species which range throughout China, Laos, and Vietnam. All species are brown with red or orange belly patterns. Exact identification can be difficult with the exception of the Chinese warty newt (Paramesotriton chinensis), which has a heavily granulated skin texture as well as the presence of yellow spotting to various degrees.

The majority of Paramesotriton offered in the trade are wild-caught. The Chinese warty newt is the most frequently available species. Warty newts in general are often misidentified and often labeled as “fire-bellied” newts and even mixed in with other species such as Cynops orientalis in dealers’ tanks. Other Paramesotriton species which enter the trade from time to time include P. deloustali, P. hongkongensis, and P. caudopunctatus. On rare occasion captive-bred individuals are available as well.

Most available species range in size from 3.5 to 6 inches (9 to 15 cm). Warty newts are robust animals and require space to move around in. A standard 10 gallon aquarium should be considered the minimal amount of space required for a single individual.  A 15 to 20 gallon aquarium can be used to house a pair.

It is not unreasonable to expect healthy, captive-bred individuals to live ten years or more with proper care and newt supplies. The author has kept a pair of P. chinensis obtained as adults for over five years.

Warty newts do not require strong lighting. A single fluorescent tube, such as the Exo Terra 5.0 Repti Glo T8 Reptile Lamp, can be used running the length of the enclosure and set on a reptile timer, such as the Zilla Lighting & Terrarium Heat Power Center for Reptile Habitats, is enough to provide a regular day and night cycle. Paramesotriton require cool temperatures in the 60’s F with the water getting no warmer than 72 F.

Substrate can consist of either sand, large grade gravel, or it can be omitted altogether. Fine grade gravel can potentially cause issues with impaction if accidentally swallowed. Any substrate used should be thoroughly washed beforehand. The substrate should be serviced regularly with a gravel vacuum while performing partial water changes.

Warty newts will accept a wide range of food items in captivity. Chopped sections of live earthworms are relished as are crickets, waxworms, freshly-molted mealworms, and roaches. Non-living food items such as sections of shrimp and commercial turtle sticks are also readily accepted which can be found in the general frog and newt food section. Adults can be maintained on two feedings a week whereas juveniles must be fed three to four times a week. Larvae require daily feedings of live food such as brine shrimp, white worms, daphnia, and black worms. Adults will generally learn to accept food from forceps and feeding in this manner will not only make it easier to monitor each individual but also go a long way in maintaining water quality. If a wide variety is offered then there is little need for additional supplementation.

Paramesotriton are not fussy about exact water parameters as long the water is clean and extremes of pH and hardness are avoided. Sponge filters driven by an air pump work well as do submersible power filters, such as the Aqueon QuietFlow Internal Aquarium & Terrarium Internal Power Filter. Partial water changes must be performed regularly in any case. Warty newts can be messy eaters if not fed with forceps.

Like all amphibians warty newts possess a semi-permeable skin and as a result should not be handled unnecessarily. If a particular animal does need to be transferred from one container to another then an appropriately sized fish net can be used. Once settled in to permanent quarters warty newts tend to develop outgoing personalities and will often swim along the front glass in anticipation of getting fed.