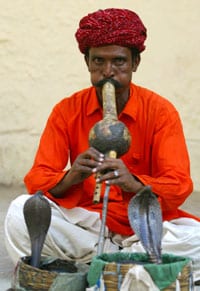 Farmer In Nepal Bitten By Cobra Bites Back, Kills Cobra

A 55-year-old farmer in Nepal who was bitten by a cobra while working his rice paddy exacted revenge on the snake and bit it, killing it in the process, according to a report from the BBC. According to the report, farmer Mohammed Salmodin was working in his paddy when the snake bit him. Upset that the snake bit him, he chased the snake and bit it until it died. Salmodin was quoted as saying that a snake charmer once told him that if you get bit by a cobra, bite the cobra back and nothing will happen to you. 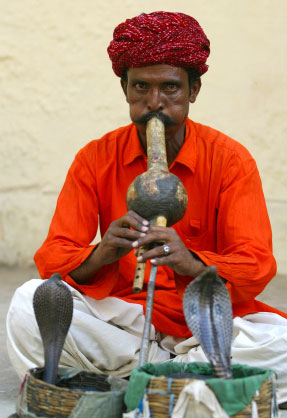 A snake charmer and two cobras. .

I was very angry after the snake bit into me. Then I followed the snake, grabbed it and bit it to death, Salmodin said. I could have killed it with a stick but I was mad with anger and wanted to take revenge. I killed it with my teeth.

Salmodin initially refused to go to the hospital but relented and went at the urging of family members. The snake that bit Salmodin apparently was a common cobra, which apparently are worshiped by Hindus in certain areas of Nepal.