Fan-footed geckos are not considered endangered by any regulatory organization. Occasionally, you can buy import fan-footed geckos in your local pet store or at a reptile show. More-desirable, captive-bred fan-footed geckos raised in a low-stress, healthy environment are a bit more difficult to find, but you can source them online. You may see an advertisement for the fan-toed gecko Ptyodactylus hasselquistii, which is commonly misidentified and is most likely P. guttatus, the most commonly imported fan-footed gecko. They can be distinguished easily given that P. guttatus has spots and P. hasselquistii has banding in its coloration patterns.Provided you have a healthy, well-established pair of fan-footed geckos of the genus Ptyodactylus at the age of 12 months, or older, you should be able to breed them successfully. 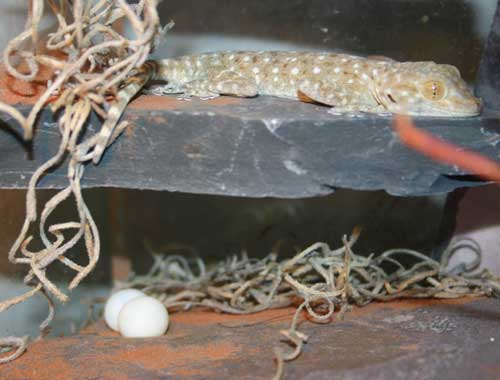 Female fan-footed geckos may lay five to six clutches or more of eggs each breeding season.

Once you obtain some fan-footed geckos, set them up as male-female pairs or singles only, because they pair bond and will fight with others outside their pairing. Mature male fan-footed geckos are easily identified by their prominent hemipenal bulges.

Pairs of fan-footed geckos are kept together year round, and experienced keepers induce breeding with a cooling or “brumation” period during the winter. This lasts at least two months. During brumation, shorten the light cycle to no more than daylight hours in your area. Daytime temperature should be approximately 70 degrees Fahrenheit, and night about 50 degrees. Consequently, the geckos’ appetites will be reduced at these lower temperatures and shorter light cycles. Offer food only about twice a week. Water misting can be reduced to every other day.

After the brumation period, once spring has started, gradually raise the temperature back to normal (a basking spot between 90 and 100 degrees, and the cool end between 80 and 90 degrees during the day) over the course of a few days. Mating behavior should start at this point. The male fan-footed gecko will start vocalizing and head bobbing to the female more intensely than usual. Given that these are established pairs, most female fan-footed geckos are receptive. If a female does not want to breed, she may attack the male fan-footed gecko. However, I have not seen anything in my research to indicate this genus does that. Some geckos are hard to pair, but these seem not to be, as far as I know.

Two to three weeks after mating, the female fan-footed gecko will glue two sticky eggs to a rock surface using her feet to position them. In the wild, female fan-footed geckos are known to have communal laying sites. If a rock surface is not available, or is cooler than the sand, the female will bury her eggs in the sand. Do not remove the eggs. Leave them where they are, and let them hatch at the same temperature as the enclosure. In one to six days, you can see veins in the eggs; in two to 16 days, the eggs will turn pink; in 30 to 40 days, you can see eyes; and in approximately 45 to 100 days, the eggs will hatch, depending on the species and temperature of the eggs. The higher the temperature, the faster the fan-footed gecko eggs will hatch. Female fan-footed geckos may lay five to six clutches or more of eggs each breeding season at intervals as short as two weeks.

Once the fan-footed gecko eggs hatch, the parents will not eat the young immediately; however, most breeders are of the opinion that eggs should be removed and raised separately, because the young may eventually be eaten and certainly will be out-competed by the larger adults for food. Young fan-footed geckos may be raised together in small groups of three to four geckos in small vivarium. These enclosures need to be relatively tall, so as to not to overheat the small geckos under the warm lights they will need to grow properly. The minimum size terrarium should be no smaller than 11 3/4 inches high, 7 3/4 inches wide and 8 inches long. Feed hatchlings daily the same food the parents eat, only a smaller size. At 6 months old, hatchling fan-footed geckos will begin to vocalize with a squeak. They should be provided separate adult-sized terrariums when they reach sexual maturity in about one year.

References
Baha El Din, S. 2006. A Guide to the Reptiles and Amphibians of Egypt. The American University in Cairo Press, Cairo.

Zlotkin, E., Milman, T., Sion, G. and Werner, Y. 2003. “Predatory behavior of the gekkonid lizards, Ptyodactylus spp., toward the scorpion Leiurus quinquestriatus hebraeus, and their tolerance of its venom.” Journal of Natural History, 37(5): 641-646.