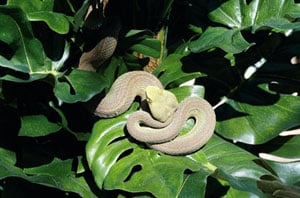 I can think of no other species of snake as variable in coloration and pattern as this reptile.

I can think of no other species of snake as variable in coloration and pattern as the eyelash viper (Bothriechis schlegelii). While the most common ground colors are variations of green, golden, yellow or red, brown and gray ground colors also exist. Patterning can include black, yellow, peach and red. Specimens of solid colors, some with a thin dorsal stripe, are known. What they look like as babies is probably not what they will look like as adults. Often it takes two to three years for the final adult coloration to develop. 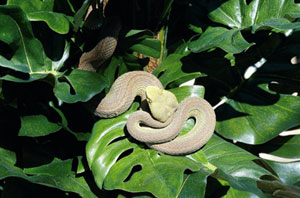 Eyelash vipers range from southern Mexico into northwestern South America. This is a patternless green morph with a stripe.

I had a solid yellow baby that started developing some orange on its sides at about 1 year old, and at 2 years it started developing grayish blotches on its sides. If specimens are basically green as babies, they will stay predominantly green. Likewise, if they are yellow, they will remain mostly yellow. However, whether mostly green or yellow, other colors and patterns may creep in as they grow.

For years I admired these animals without owning any. A few years ago, I decided to rectify that situation, and I bought three neonate eyelash vipers. Not long after that there was an opportunity to buy one of the finest colonies of eyelash vipers in the country. I jumped on it and haven’t regretted it one bit.

These are venomous animals and should be treated with respect. Always handle them with a hook. When trying to get them out of their enclosures, sometimes they will hold on to branches with their prehensile tails, so the tails must be gently tapped with a stick or other instrument to get them to release. Because they are potentially harmful, there may be laws in your area regulating ownership (or preventing it). Regulations vary from city to city, county to county and state to state, so check with your local agencies to find out if you’re allowed to keep them.

In most of their range they inhabit relatively humid forest areas from sea level to around 4,950 feet. In Colombia they occur to over 8,500 feet. Generally, they follow the moderate elevations of mountain slopes, with most populations on the Caribbean side, but there are populations on the Pacific side in Panama and northwestern South America.

Eyelash vipers are one of eight species of the genus Bothriechis and certainly the most variable. The other seven species are aurifer, bicolor, lateralis, marchi, nigroviridis, rowleyi and thalassinus.

Bothriechis schlegelii are medium-sized, prehensile-tailed arboreal vipers. Captive-raised specimens tend to be somewhat larger than wild specimens. In the wild, adult females average around 24 inches, while in captivity specimens of around 36 inches are known. Males are smaller, averaging 14 to 16 inches. Males seldom attain lengths of more than 18 inches. 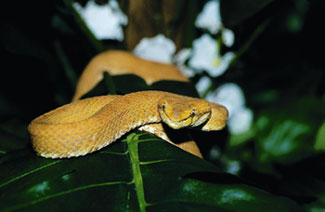 In most of their range, eyelash vipers inhabit relatively humid forest areas in the low to moderate elevations of mountain slopes. This is a patternless peach color morph.

The primary characteristic, which gives these snakes their common name, is the presence of raised superciliaries between the supraocular and the eye. This characteristic (the “eyelash”) is considerably reduced in specimens from South America.

At one time eyelash vipers were broken up into two subspecies: B. s. schlegelii and B. s. supraciliaris. The latter was later given its own species status and then was dropped altogether. It was determined that the variations in various scale counts throughout the range were just that — population variations — and didn’t warrant subspecies or species status.

There are many ways to house eyelash vipers in captivity, but they all have a few common elements: branches, plants, ventilation and a way to maintain some humidity. I have found that these snakes prefer smaller branches on which to drape themselves, generally not greater than the girth of the snake.

I use cypress mulch as a substrate, as it holds moisture without allowing fungus growth. I also use Pothos plants to add to the humidity and to provide a feeling of security for the snakes. Pothos doesn’t require much light, making it ideal for indoor use. In a large enough enclosure the Pothos can be planted in the substrate. I keep the plants in planters for better rooting.

Housing depends on your available space and budget. Some of the nicest setups I’ve seen are the 75-gallon lizard lounges, heavily planted with Pothos in a deep substrate, but this is not space efficient for many of us. Colonies can also be kept in shower stalls, which provide for good vertical movement. While they are primarily arboreal, I’ve had a few eyelash vipers that preferred to live on the ground.

I keep mine mostly in wooden cages painted with acrylic paint and sealed around the lower joints to hold in water. My enclosures are 16 inches by 24 inches by 16 inches tall. This size enclosure gives them sufficient space to stretch out and move around. There are small vents in the top and back to allow for ventilation. The fronts are hinged acrylic doors.

There is a fluorescent bulb in each cage that is wired to a timer. The ballasts and wiring are on the outsides of the cages. The lights are primarily for the plants and to provide a photoperiod for the snakes. I currently have the lights set to turn on around 9 a.m. and turn off at 6:30 p.m. Because there is ambient light from outside, I use that ambient light to control the photoperiod (hours of light and dark) for the snakes.

Water bowls are elevated so they are just below the branches. Raising the bowls to the snakes’ level seems to aid in getting them to drink from them.

Make sure your cages are secure — you don’t want these animals getting loose. Also, especially if you have children, put locks on the cages.

Eyelash Viper Housing–Do it Yourself

The enclosure (see photo) is made from half-inch, hard-core plywood, primed and painted with acrylic paint. The bulb is an 18-inch fluorescent tube. The light fixtures are mounted from the outside and wired to the ballast, which hangs outside on the back. The top grate is a diamond-mesh, vinyl-coated gutter guard and the back grate is a slotted, aluminum, soffit vent. The door is constructed from quarter-inch acrylic. 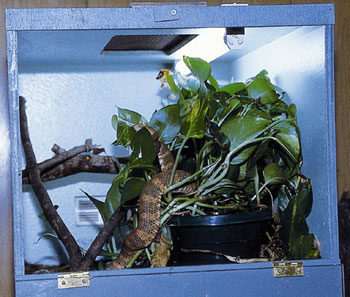 The author houses his eyelash vipers in wooden cages with hinged acrylic doors. Each enclosure is 16 inches by 24 inches by 16 inches tall.

After painting, I sealed all the bottom joints with silicon to keep water from seeping out. I stack these enclosures four high. Each has a light with its own plug, and all of these are plugged into a four-plug power strip. The strips are then plugged into timers.

If you pay attention to a few basic rules, eyelash vipers are not difficult snakes to keep. Keep in mind these two rules: Don’t overfeed adults and provide water and humidity at all times.

On a weekly basis I pour a lot of water onto the plants and substrate. I live in a fairly dry area of west Texas, so maintaining sufficient humidity is always a problem. Water is imperative for these snakes. They sometimes drink from the water bowls, but more often they drink from water raining down on them. 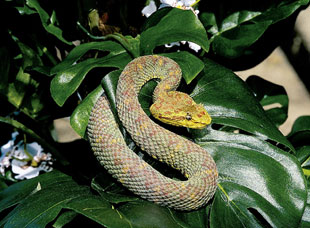 Adult eyelash vipers, such as this green-and-red phase specimen, are fairly easy to care for. Neonates, however, can be difficult to feed.

Misting them at least weekly is a must, twice weekly is better. An automated daily misting system, if possible, is better yet. A short cage-wide misting is good for the animals and to raise humidity, but is not necessarily sufficient for them to drink.

I use a 1-gallon pump sprayer to spray the entire cage as well as the snake itself, concentrating on the head. Usually two to three minutes is sufficient. You can see the head muscles contracting as they drink; when they’ve had enough they’ll move away. Sometimes they will move away immediately, telling me they aren’t thirsty, sometimes it takes a bit longer. Regardless, I still spray the entire snake to get it moist.

Temperatures of 78 to 82 degrees Fahrenheit are sufficient for eyelash vipers, with a slight wintertime drop of four to five degrees to stimulate breeding.

Breeding occurs in late winter to early spring, and gestation is around six months. Live births usually occur in August and September, and occasionally on into October. I have sat for hours waiting to photograph the actual birthing process, but the females have always waited until I was absent to give birth. The best I’ve been able to do was to photograph a slug (unfertilized egg) being dropped.

Neonates can be kept in small critter carriers, plastic shoeboxes or other makeshift enclosures. Small branches not greater than the girth of the snake are necessary. Whatever type enclosure you use, a section of screen on top for ventilation is recommended, but not so much that the enclosure rapidly dries out. Again, I use cypress mulch on the bottom to maintain some humidity, but I pour out any excess water after spraying. It’s critical to keep neonates sprayed and humid. They seem to drink only from spraying, although I do keep small water bowls in with them. While humidity is very important, if the enclosure gets too moist, you will have problems, often resulting in the loss of the young snakes. And, with the frequent spraying, it is very possible to get the enclosure too moist.

Neonates are very adept at escaping through very small spaces. Once I was transporting a litter in a critter carrier on which the corner had been knocked up so slightly it wasn’t even visible. When I got home, all nine babies were loose in the back of my truck. It took a few days to find them all. One was found atop the shift lever and another was found in the ashtray. Another one was under a paper napkin on the floor and bit me when I picked up the napkin. The initial bite was an itchy, little welt, similar in appearance to a mosquito bite, that was gone the next day.

Eyelash vipers are slender snakes and should not be fed so much as to become obese. In the wild these snakes eat nonfatty foods, mostly lizards and frogs. In captivity they are fed mostly mice, which have a much higher fat content than wild foods. 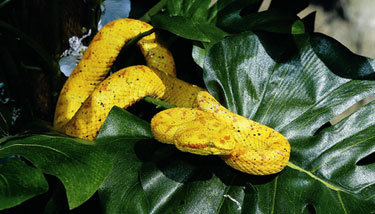 In the wild this beautiful yellow-and-red Bothriechis schlegelii would eat mostly lizards and frogs.

Don’t underestimate their striking speed. When food is offered, they will reach out fast and grab onto prey. It is rare that I have to tease an adult into feeding.

Feeding neonates, however, can be a tedious process, as it is often necessary to tease-feed them. It is rare that a neonate will take a whole pinky, as baby eyelash vipers are only 3 to 4 inches long. Pinky haunches are about as much as they can handle. I have tried cutting pinkies in half, but generally they refuse food this large until they have eaten a few meals. If you have access to small amphibians, such as Acris (grass frogs), it might be preferable to offer these until the snakes grow to the point that they can take whole pinky or fuzzy mice. Then feeding becomes much easier.

Because eyelash vipers are not heavy snakes, it is possible to set up nicely decorated enclosures for them. This, combined with the amazing variety of colors and patterns of these snakes, makes them an excellent display animal. Owing to their need to be misted regularly, particularly for drinking purposes, they are a bit more time-intensive than some snakes, but they are worth the extra effort. Imported neonates are occasionally available, but captive-bred/born eyelash vipers are available from several U.S. breeders. If possible, get established feeders.

*This article first appeared in the September 2004 issue of Reptiles magazine.*