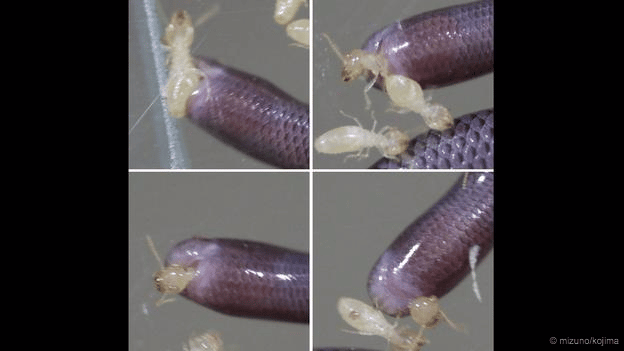 Did You Know That Blind Snakes Decapitate Their Prey?

The blind snake removes the head of termites before it eats them.

Those of us who keep snakes know that they eat their prey whole, swallowing the entire prey item fur or feathers, or scales and all. But did you know that blind snakes decapitate their prey, in this case, termites before they eat the entire body except the head?

Researcher Takafumi Mizuno of the Kyoto Institute of Technology in Japan discovered that the blind snake (Indotyphlops braminus) removes the head of the termites it eats before eating the body, and sometimes, if the whole termini is eaten, regurgitates the insect and then removes the head. Mizuno also found that if the snake swallows the entire termite, the head is not digested but rather comes out the business end intact.

How the snake removes the head is also interesting. Mizuno observed the snake consumes the entire body of the termite except the head, leaving it outside its mouth. It then was observed rubbing the termites head against the side of its cage until the decapitation occurred. Mizuno also wrote in his research paper, published in the Journal of Zoology, that the blind snake only decapitated its termite prey only about half the time it ate the termites. The researchers are unsure why some termites have their heads removed before the snake eats them but they do have some theories as to why the blind snake removes the heads of the termites before they eat them.

According to Mizuno, the blind snake will always try to remove the head of the termite but is only successful about 50 percent of the time. Only two species of the Asian crab eating snake removes body parts before eating its prey, and in the case of the crab-eating snake, it removes the legs of its prey items before it eats the rest of the crab.

Loading...
Newer Post
Federal Lawsuit Targets Police Use Of Burmese Python In Alabama Jail
Older Post
One Species Of Frog Has Morphed Into A Species Complex With 5 Frogs
Advertisement