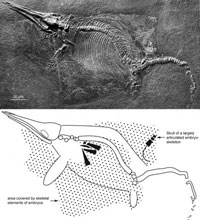 New forensic techniques crack this ancient mystery of what happened to these prehistoric reptiles.

A pregnant ichthyosaur female, whose fossilized remains were discovered at Holzmaden in Germany has puzzled researchers for quite some time. The skeleton of this particular extinct marine reptile that died around 182 million years ago is almost immaculately preserved and the fossilized bones of the mother lie largely in their anatomical position.

The bones of her ichthyosaur embryos, however, represent a different story. For the most part, they lie scattered outside the body of their mother. Such peculiar bone arrangements are repeatedly found in ichthyosaur skeletons. According to broadly accepted scientific doctrine up until now, this was the result of her carcass exploding.

Putrefaction gases produced during the decomposition process were believed to cause the carcass to swell and burst. As a result, the bones of embryos would be ejected out of her body.

Based on an elaborate series of measurements and an analysis of the physical-biological parameters, however, a research team of sedimentologists, paleontologists and forensic scientists has now managed to dispel the myth of exploding dinosaur carcasses.

Putrefaction Gas Pressure Not High Enough
In order to gauge the pressure of the particular gases that can actually develop inside a putrefying ichthyosaur, the researchers sought comparative models and found one in human corpses. Humans and many ichthyosaur species have a similar size range.

Consequently, the formation of similar amounts of putrefaction gas can be expected during decomposition. At the Institute of Forensic Medicine in Frankfurt, Germany, a manometer was inserted into the abdominal cavity through the umbilicus in one hundred corpses. The putrefaction gas pressures measured were only 0.035 bar. In the case of the ichthyosaur carcasses that came to rest below 50 to 150 meters of water, however, putrefaction gas pressures of over five to 15 bar would have been necessary to cause an explosion.

According to Zurich paleontologist Christian Klug, gas pressures of this dimension and therefore actual explosions are impossible: “Large vertebrates that decompose cannot act as natural explosive charges. Our results can be extended to lung-breathing vertebrates in general,” he added.

What Actually Happened 182 Million Years Ago
According to the researchers, the fate of ichthyosaur carcasses can be reconstructed as follows. Normally, the bodies sank to the seabed immediately after death. In very deep waters, they were broken down completely by means such as putrefaction, scavenging and bone-destroying microbes.

In shallower water less than 50 meters deep, and at a temperature of over 39°F, however, the corpses often rose back to the surface on account of the putrefaction gases accumulating inside the body. At the surface, exposed to the waves and scavengers, they decomposed within anything from a few days to weeks, and their bones were scattered over a wide area of the seabed as they sank.

Ichthyosaur skeletons only remained preserved more or less in their anatomical position under very special circumstances. This demanded a lack of oxygen, medium water depths and insignificant bottom water currents. Only then were the putrefaction gases compressed strongly enough through the high water pressure and dissolved in the bodily fluids, and the carcasses were not completely broken down because of a lack of scavengers.

On this basis, the carcass of the ichthyosaur female from Holzmaden thus sank to the bottom of the sea, which was up to 150 meters deep, where it decomposed. This led to the decomposed embryo skeletons being transported out of the body of the mother by minor currents here on the seabed, thereby explaining their random positioning.