Chytridiomycosis now reported throughout the neotropics 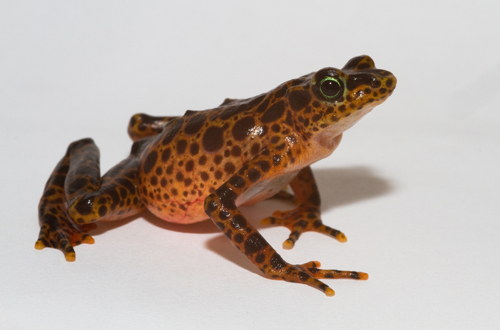 Smithsonian scientists have just confirmed that chytridiomycosis, the rapidly-spreading and deadly amphibian disease, has reached a site near Panama's Darien region. This was the last area in the entire mountainous neotropics to be free of the disease. This is troubling news for the Panama Amphibian Rescue and Conservation Project, a consortium of nine U.S. and Panamanian institutions that aims to rescue 20 species of frogs in imminent danger of extinction.

Chytridiomycosis has been linked to dramatic population declines and even extinctions of amphibian species worldwide. Within five months of arriving at El Cope in western Panama, chytridiomychosis destroyed 50 percent of the frog species and 80 percent of the individuals.

"We would like to save all of the species in the Darien, but there isn't time to do that now," admits Brian Gratwicke, biologist at the Smithsonian Conservation Biology Institute and international coordinator for the Panama Amphibian Rescue and Conservation Project. "Our project is one of a few to take an active stance against the probable extinction of these species. We have already succeeded in breeding three species in captivity. Time may be running out, but we are looking for more resources to take advantage of the time that remains."

The Darien National Park is a World Heritage site and represents one of Central America's largest remaining wilderness areas. In 2007, Doug Woodhams, a research associate at the Smithsonian Tropical Research Institute, tested 49 frogs at a site bordering the Darien. At that time, none tested positive for the disease.

In January 2010, however, Woodhams found that 2 percent of the 93 frogs he tested were infected. "Finding chytridiomycosis on frogs at a site bordering the Darien happened much sooner than anyone predicted," Woodhams said. "The unrelenting and extremely fast-paced spread of this fungus is alarming."

The Panama Amphibian Rescue and Conservation Project has already established captive assurance colonies in Panama of two priority species endemic to the Darien-the Pirre Harlequin Frog (Atelopus glyphus) and the Toad Mountain Harlequin Frog (A. certus). In addition, the Smithsonian's National Zoo maintains an active breeding program for the Panamanian golden frog, Panama's national animal, which has not been seen in the wild since 2008.

"We would like to be moving faster to build capacity," Gratwicke said. "One of our major hurdles is fundraising to build a facility to house these frogs. Until we jump that hurdle, we're limited in our capacity to take in additional species."

"These animals that we are breeding in captivity will buy us some time as we find a way to control this disease in the wild and mitigate the threat directly," explained Woodhams. One particularly exciting lead in the effort to find a cure is that anti-chytrid bacteria living on frog skin may protect their amphibian host from chytrid by secreting anti-fungal chemicals. Woodhams recently discovered that some Panamanian species with anti-chytrid skin bacteria even transmit beneficial skin chemicals and bacteria to their offspring.

"We are all working around the clock to find a cure," Gratwicke said. "Woodhams' discovery that defenses can indeed be transferred from parent to offspring gives us hope that if we are successful at developing a cure in the lab, we may find a way to use it to save wild amphibians."