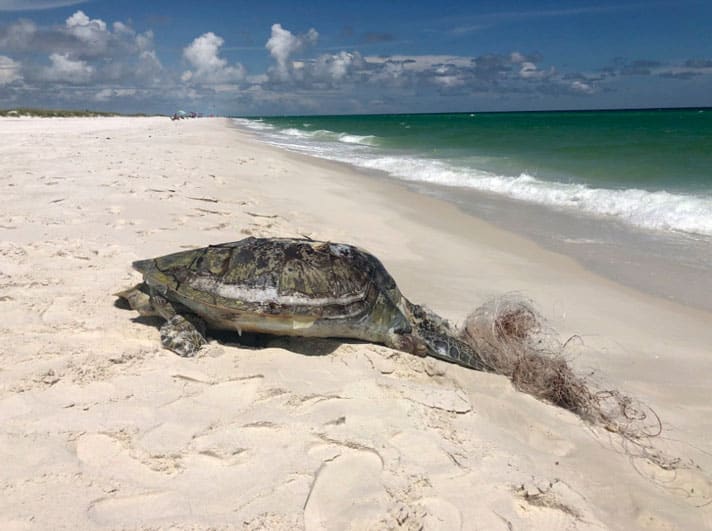 “Another reminder to leave only your footprints when visiting the beach!”

A sea turtle that was entangled in fishing gear and plastic trash was found dead on a beach in Florida. The turtle was found on Pensacola Beach and meteorologist and lifeguard Brantly Keiek took a photo and shared it on social media in an effort to  “help spread awareness about the importance not littering, especially in coastal areas, where animals can mistake trash as food.”

😢🐢 A dead sea turtle found near Park East at Pensacola Beach was tangled in fishing line and plastic trash. Another reminder to leave only your footprints when visiting the beach! #DontLitter pic.twitter.com/QqnEtiAKVe

“There was a small group of people gathered on the beach near the deceased turtle and local animal control officers were on scene documenting the incident,” Keiek said in The Hill.

Sea turtles have had a hard time dealing with the amount of plastic pollution in the world’s oceans. In August 2015, a video of researchers removing a plastic straw from the nostril of a sea turtle was uploaded to YouTube and over the course of the next several years, the video of the writhing reptile went viral. In a study last year of marine plastics, published in the journal Global Change Biology, researchers found that all seven species of sea turtle have been found with micro plastics in their digestive systems.

As Keiek wrote on Twitter,  “Another reminder to leave only your footprints when visiting the beach!”