How toxic is the poison of the golden dart frog?

Take a walk in the lowland rainforest of the Cauca region of Colombia and you might spy a bright-yellow or orange frog sitting boldly out in the open on the forest floor. Here in the foothills of the Cordillera Occidental mountain range, lives what may well be the most poisonous animal on the planet. This frog's bright coloration is perhaps the best example of aposematism – a warning to would-be predators that to make a meal of this frog means certain death. 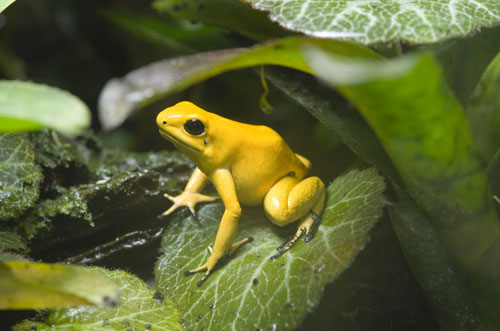 Each wild adult P. terribilis possesses as much as 2 milligrams of batrachotoxins. That's enough to kill at least 10 people.

The golden dart frog (Phyllobates terribilis) is one of the largest of the Dendrobatid frogs, a group famed equally for their poisons as for their stunning colors. Their bold behavior is likely due to their sheer toxicity. The frogs get their most potent poisons, the batrachotoxins, from the foods they eat in the wild. While wild-caught individuals retain much of their batrachotoxins indefinitely, captive-bred P. terribilis frogs have no detectable levels and are relatively harmless. Of course, the frogs don't know that, so they are still bold, making them superb terrarium animals.

One of the questions most commonly asked is why has this frog evolved to be more poisonous than any other? There is at least one plausible answer. Edmund D. Brodie and co-workers at Utah State University found that another very toxic amphibian, the California Newt, which possesses the poison tetrodotoxin -incidentally, also found in puffer fish ("fugu" fish) – is engaged in a predator-prey arms race with a species of garter snake. The snake continuously develops resistance to the newt's poison, so the newt becomes more toxic, and the snake becomes yet more resistant to the poison, and the cycle continues. This has gone on for who knows how long, making the newts acutely toxic. How does this relate to our favorite frog? It turns out that there is a species of frog eating snake in Colombia that has some resistance to batrachotoxins!

The exact origin of the batrachotoxins is still unknown, but in New Guinea there is evidence that certain beetles accumulate these substances in their tissues, which show up in the feathers of birds that eat the beetles. The same family of beetles is found in South America, and beetles feature highly in the diets of most amphibians. Batrachotoxins are steroid molecules with a chemical structure similar to non-toxic molecules like cholesterol, bile salts and even the Vitamin D in your body.

If you're poisoned by one of these frogs, the toxins interfere with your body's ability to transmit electrical signals (your nervous system), resulting in muscle spasms, numbness, fibrillation, arrhythmia and heart failure.

Each wild adult P. terribilis possesses as much as 2 milligrams of batrachotoxins. That's enough to kill at least 10 people. When stressed, wild frogs exude a cocktail of toxins including batrachotoxins. The Emberá Indians of the Cauca region famously coat their blow gun darts with this toxin by using the heat from a nearby fire to stress a P. terribilis, and then rubbing their darts over the back of the frog, without physically harming it. When using the poison or gathering the wild frogs, these hunters have to be especially careful not to get the milky secretions on their skin. Even this limited exposure can be harmful.

There is something of a mystique surrounding this frog; many people like to keep what they perceive as dangerous animals. Given that captive-bred specimens of this frog do not possess the dangerous toxins of their wild relatives, this is the safest "dangerous" animal to keep in captivity. Unfortunately, lawmakers are not always as educated as enthusiasts and scientists, and in the Canadian provinces of British Columbia and Alberta, these frogs have been banned. Wild-caught specimens are unheard of (and illegal to export from Colombia), so this prohibition is of little benefit to the frogs or the ordinary people who wish to learn about this fascinating animal.