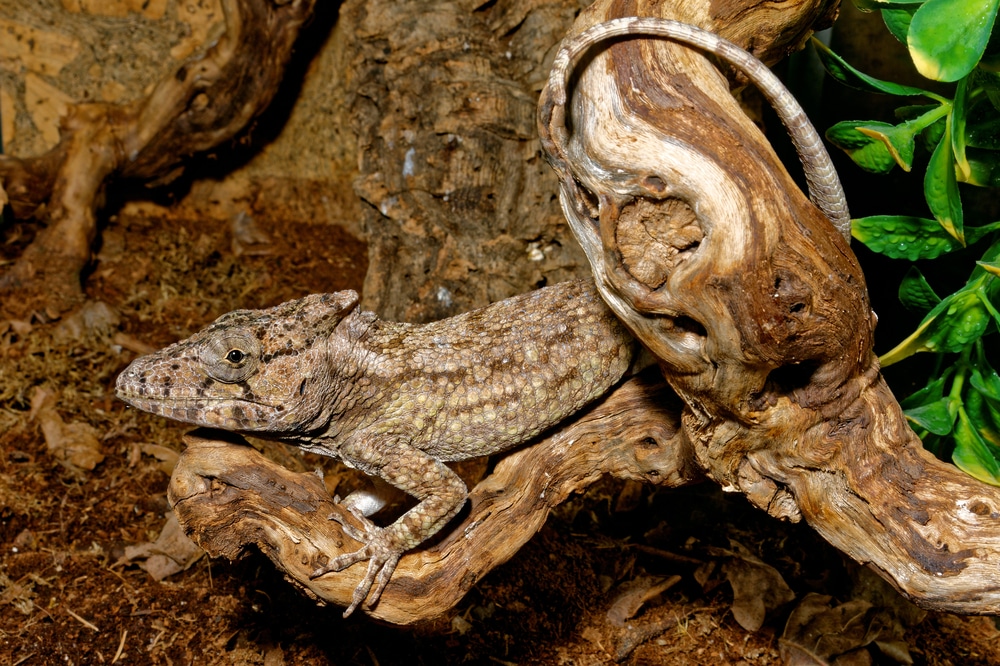 Looking for an exotic, easy-to-care-for addition to your collection? Cuban false chameleons are one of the most unusual-looking lizards in the Caribbean. They are almost alien in appearance and aren’t really chameleons. They have a large, bony casque at the rear of the skull, chameleonlike eyes capable of limited independent eye movement, and a row of flexible barbell-like scales under their chin along the edge of their dewlap.

Originally, Chamaeleolis was its own genus with five recognized species (C. agueroi, C. barbatus, C. chamaeleonides, C. guamuhaya and C. porcus) all endemic to Cuba (Leal and Losos, 2000). However, the group was put into the Anolis genus, and Chamaeleolis is now considered a subclade of Anolis (Hass et al., 1993; Leal and Losos, 2000; Losos, 2009). On an evolutionary note, the Chamaeleolis genus was initially considered an ancient form of Anolis, but recent genetic work shows it to be a fairly recent offshoot of Anolis (Jackman et al., 1999).

Chamaeleolis lizards are found throughout Cuba, with C. chamaeleonides having the widest distribution. They primarily inhabit broadleaf forests with closed canopies, but they have been observed in fruit and coffee plantations as well as in other urban environments.

Despite being a large lizard — a little longer than 7 inches snout to vent length (SVL) for males and less than 7 inches for females — most individuals are found on small-diameter perches. Their laterally compressed bodies, short tails (usually shorter than the body), and relatively short limbs are adaptations for moving along narrow twigs.

Cuban false chameleons really are the perfect lounge lizards. Leal and Losos (2000) found that when observing C. barbatus in the field, the animals were inactive 63 percent of the time. These anoles perch on large twigs and depend on their cryptic coloration to avoid predation. Their concealment repertoire also includes a rocking and swaying walk. If you look like part of a twig, your disguise only works if you act like a twig. In this case, like a twig blowing in the wind. When all else fails, Chamaeleolis will leap to other perches to escape whatever is harassing them.

The group does not have a lot of sexual dimorphism like other anole species. Males are slightly larger, with slightly bigger heads. The easiest way to tell the sexes apart is that males have a pair of enlarged scales just below the vent. These scales are present in hatchlings, but they can be hard to see in small specimens.

If considering any of the Cuban false chameleons for captives, the information I present here for C. chamaeleonides will work for other Chamaeleolis species as well. 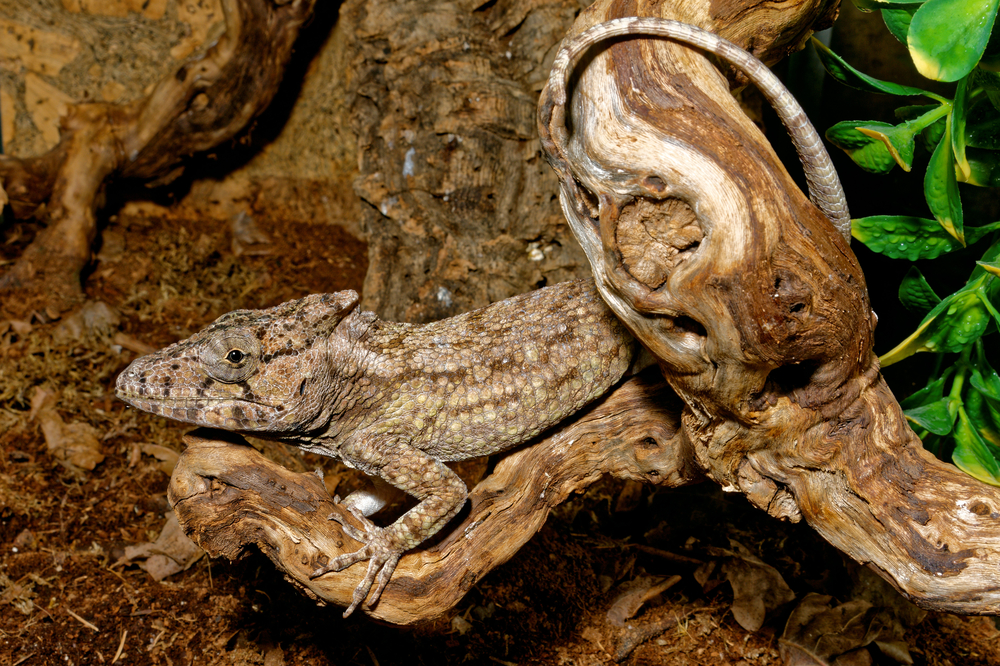 Cuban false chameleons are one of the most unusual-looking lizards in the Caribbean.

I have successfully housed Chamaeleolis in two different enclosure designs. Initially, I used 29-gallon long aquariums with screen lids. Now I also use all-screen cages, measuring approximately 231⁄2 inches long, 151⁄2 inches wide and 231⁄2 inches high. Make sure all cages have drains to allow excess water to drain from the enclosure. For both cage types, use tree branches measuring 11⁄2 inches to 21⁄3 inches in diameter as perches for these arboreal lizards. Place the branches at different angles to offer horizontal and vertical perches throughout the enclosure.

It is important to keep males physically and visually separated. They fight if kept together, and if they see one another across a room, they will constantly display to each other, causing undue stress and poor overall health. I use black or gray plastic trash bags that are trimmed and taped to one side of the cage. This creates a visual barrier that can get wet and only has to be replaced occasionally.

Substrate consists of moist sphagnum moss, which increases overall cage humidity. It covers the entire cage floor and is approximately 21⁄3 inches deep. This setup allows for feces to be easily picked out of the enclosure.

Live and artificial plants provide extra security for these shy lizards. Live plants supply additional humidity, but plant containers need to be continually checked for lizard eggs. The main advantage of using artificial plants, especially plastic ones, is that they can be easily cleaned and sanitized.

Like most lizards, Chamaeleolis need an ultraviolet light source to prevent metabolic bone disease. I use fluorescent black light bulbs mounted approximately 4 inches above the cage and offer a photoperiod of eight to nine hours a day. A 50-watt spotlight provides a basking spot in the cage. I place this heat source about 10 inches above a horizontal perch at one end of the enclosure. Cage temperatures range from the upper 70 degrees Fahrenheit at the cool end to the lower 90s directly under the basking light.

Chamaeleolis are specialized snail feeders, and this needs to be taken into consideration. Acquiring a source of live land snails that have not been exposed to pesticides is best. In many states, such as in California, these snails are considered pests and can be purchased at a pet store. I offer a single snail from tongs twice a week. The snails are taken whole, but the shells are broken and spit out as the lizards chew the food item. If concerned that the snail shell is too large for the lizard to break, you can pre-crush the shell. I also feed seven to 10 crickets once a week. The crickets are gut loaded with assorted greens — such as kale, collard, turnip or mustard greens — and fed a commercial cricket diet. Each cricket is dusted with calcium and vitamin D3; this is especially important for reproductive females.

I feed my Chamaeleolis by hand with tweezers to make sure they eat and to prevent large amounts of loose crickets in the cage. Chamaeleolis are susceptible to being bitten by crickets. I have on more than one occasion found lizards with large lacerations on the tail and back caused by free-ranging crickets left in the enclosure. Always leave something in the cage for hungry crickets to eat besides your lizard, such as a small piece of carrot, apple or rodent chow.

Hydration is the most important husbandry element for a healthy Chamaeleolis. Signs of dehydration include sunken eyes and lethargy. These lizards will sometimes drink from a water bowl, but they prefer to drink from a slow-dripping water source aimed at a horizontal surface, such as a perch or the broad leaf of a plant. I use a drip system with a valve to control the rate of flow. The drip bottle is emptied and filled with fresh water daily. The lizards quickly become conditioned to this system and will readily move to the water source. Make sure the cage has the right drainage system so that the substrate does not remain saturated. I keep a 5-gallon bucket under the drain hole of the cage, or use a screen cage that is tilted so that the excess water drains into the bucket.

For a drip system, you can also use a large plastic cup or a plastic half-gallon milk bottle with a pinhole punched in the bottom. Whichever delivery method you choose, wash it out once a week with a disinfectant to prevent bacteria from growing. Humidity is important, and a damp substrate will definitely help, but in some extremely dry climates, you may also need to mist the cage.

This species is not quick to bite. Usually, they perform an open-mouth display with their tongue sticking out. However, if you ignore the warning, they will sometimes bite a finger fairly hard. It’s best to place your hand under the lizard and slide the same hand under its feet. The lizard will usually transfer from its original perch to your hand quite easily, especially if you do this under it, which is the lizard’s blind side.

Chamaeleolis are fascinating lizards. Larger than your typical anole, they are much calmer and less intimidating than the knight anole (Anolis equestris). Even though Chamaeleolis have some specific requirements, I believe most reptile enthusiasts will find them a relatively easy species to keep. I have experienced few medical issues with this species. A few animals have swollen eyes, but the issue has always responded well to antibiotic drops. The most important things to keep in mind concerning Chamaeleolis husbandry are to keep the lizards hydrated and safe from hungry crickets. Follow these suggestions and you will be well on your way to having happy and healthy lizards.