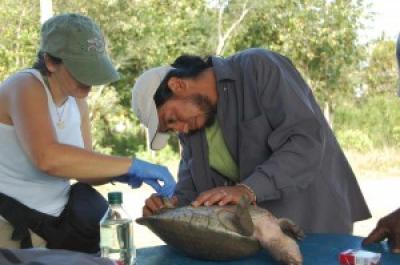 A team of Smithsonian scientists studying the genetics of the endangered Central American river turtle (Dermatemys mawii) throughout the turtle's range (Southern Mexico, Belize, and Guatemala) have found that the aquatic turtles separated geographically by long distances and high mountain chains share much of the same genetic structure, according to a report in Science Daily. The turtles were apparently carried and traded for centuries by people who readily traveled those distances that scientists say the turtle would otherwise be unable to travel. In their paper, published in the journal Conservation Genetics, the scientists say that small tissue samples were collected from turtles living in drainage basins in 15 locations across their known range. In all, samples were taken from 238 wild turtles. The scientists had expected to find a diverse and varied genetic lineage, but what they found was apparently surprising.

"We were expecting to find a different genetic lineage in each drainage basin," said Gracia González-Porter of the Center for Conservation and Evolutionary Genetics at the Smithsonian Conservation Biology Institute, and the lead author of the study. "Instead, we found the mixing of lineages. It was all over the place. Despite appearing isolated, the genetic data showed the different turtle populations had been in close contact for years," she said in the report.

The study was conducted because of the plight of this endangered animal. According to the report, they are the last surviving species of the family Dermatemydidae. D. mawii, the most endangered turtle species in Central America.