How long does it take to know whether a reptile egg is good?

How long will it take to know whether the seemingly viable reptile eggs really are good? What are the warning signs that something is wrong, and when will they manifest? 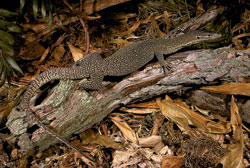 Monitors tend to lay hardy eggs that can be candled within the first couple weeks to check for viability.

A. You can distinguish viable reptile eggs from infertile reptile eggs by candling them, at least in species that don’t go into a resting period (diapause) after laying. Monitor lizard eggs generally start developing quickly, absorbing moisture from the substrate, exchanging gases and growing. The growing reptile embryo begins to put out blood vessels and tissues along the inner surface of the shell, these develop outward from a central point (often called the embryonic disk).

A candling device is simply a pinpoint light source that is held behind the reptile egg. As the light passes through the shell, you see a shadow image on your side. If a reptile egg is infertile, it remains clear because there is no growth. Usually about a week after laying, the embryo of a fertile egg begins to grow, and you will first notice a small round disk. A week later, the disk will have grown, and more of the shell will become opaque, because the light cannot easily penetrate the tissues and blood vessels. After several weeks, the entire egg will appear opaque, because the body of the embryo and its many tissues simply stop all light.

Candlers are available from bird supply dealers, as chicken and parrot eggs often are candled on a regular basis. You also can try to make a simple candler by using a bright flashlight and shining it through a pair of pinholes in opposite ends of a small metal can (such as a tomato sauce can) lined with black paper. The holes concentrate the light so it penetrates the shell better. Be careful using homemade candlers, because the light may be hot enough to harm developing embryos. Don’t candle eggs every day — try about four or five days after they are laid and then at weekly intervals. Remember not to turn the eggs when you replace them in the incubator.

As for warning signs, I can’t help you much beyond generalities. Monitor lizard eggs can suffer from being too dry or too wet. A dry reptile egg can collapse or dimple, which usually is a sign to increase the moisture. This often happens early in development. Too much moisture being absorbed into the egg is harder to recognize. The egg appears bloated and distorted in the worst cases, indicating too much water is being drawn inside, potentially drowning the embryo. This often happens toward the end of incubation.

Discolored areas on the shell seem to represent mostly colonies of harmless bacteria and fungi. They are generally not worth trying to control unless they become overwhelming, so let them be.

Monitor lizard eggs are fairly hardy, and I’m sure you will have some success, if not this time then next. Because this is a first mating, the odds are your success will be limited, but your monitors have many years before them to try again.