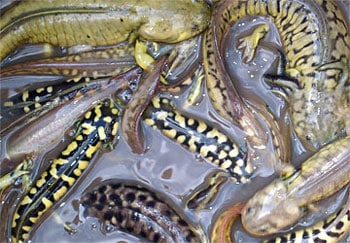 The native California tiger salamander is being pushed out by a hybrid salamander.

California tiger salamanders (Ambystoma californiense) are listed as endangered by the U.S. Fish and Wildlife Service. However, protecting them is not as easily done when there are salamanders in the wild that are a cross between them and the barred tiger salamander (Ambystoma mavortium), an introduced and now invasive species.

"What we found was, basically, in ponds that had hybrids they ate nearly everything in the pond. Hardly any frogs were able to survive. Hardly any larval newts,” Maureen Ryan, a researcher at the University of Washington told KPCC. "They could dramatically affect the whole pond ecosystem.”

Estimates put the percentage of California salamanders with hybrid genes at 1/3 the total population, but researchers are worried that these hybrids are spreading into areas in which the pure California tiger salamanders once thrived.

University of California, at Los Angeles researcher Brad Shaffer, who has kept a colony of California tiger, barred tiger and hybrid salamanders at the university for more than 20 years told the station that protecting the native species while removing the hybrid and invasive salamanders would be a tricky management issue. He said more research should be conducted to better identify solutions that would enable the native salamanders to do better than they are currently.

One potential solution would be to drain the ponds in which the hybrids can be found as the hybrids don't do well in frequently drained ponds. Native salamanders do better in these types of ponds. A project to remove hybrids from ponds in Santa Barbara, one of three distinct areas for populations of native salamanders in the state that are slated for US Fish and Wildlife Service recovery plans, has been proposed and the California Department of Fish and Wildlife is hoping to fund the project soon. 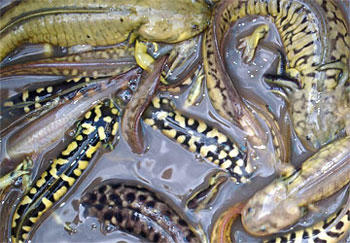