A 20-year study led by a professor of biology in Arts & Sciences at Washington University in St. Louis concludes that the Eastern collared lizard (Crotaphytus collaris collaris) can restore its populations with little help from biologists after a burn technique called landscape-level burning on Ozark glades, its natural habitat. The study by Alan R. Templeton, PhD, states that the collared lizard undertakes an expanded restoration on its own after a burn that also benefits other species, including the fen orchid and fen dragonfly, with little assistance from biologists. 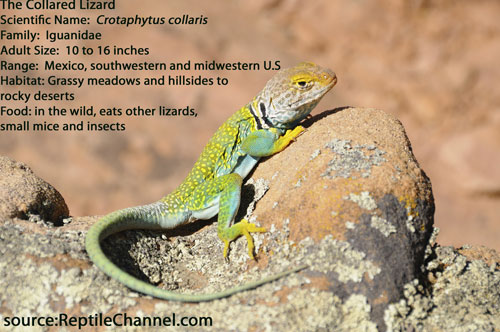 The collared lizard grows to 10-16 inches in length. Its range includes Mexico and the southwestern U.S. and extends into the midwestern U.S.

In 1982, Templeton and colleagues did a survey of the Ozarks and concluded that 75 percent of the lizard populations were gone, and in other areas the lizard was known to populate, it was extinct. The scientists determined that the introduction of firefighting after World War II led to an explosion of the Eastern red cedar tree, a species that was confined to the bluffs and cliffs of the Ozarks prior to the advent of forest firefighting. When man decided to fight forest fires in the area, the red cedar grew unabated, affecting the habitat of the collared lizard by effectively shading out the areas in which the lizard lived, turning what was once a sunny and sparse, hot, desert-like micro-climate to an area thick with vegetation.

In the mid 1980s, Templeton worked on restoring areas of the Ozark glades, which involved removing the red cedar trees and burning the areas. The restoration was a success and the plants that were native to the areas prior to the invasion of the giant tree canopies returned. He reintroduced the lizard over the course of several years in the mid to late 1980s, but in 1993 determined that the lizard was not faring well and the small populations would collapse due to dense underbrush that hampered the lizard’s ability to travel. To the dismay of foresters and environmentalists, a landscape level burn was recommended, and after two years of heated discussions, the burn took place.

“We did the burn and to tell the truth, I wasn’t really very optimistic about it,” Templeton told the Washington University in St. Louis newspaper. “I thought it was more really to reduce the fuel load, but I was stunned by what it did. Just one burn totally changed the environment. All of us were just shocked at how beneficial it was. “The fire mainly got rid of the woody understory and thick mats of leaf litter, but it didn’t destroy the canopy trees. In fact, with the woody understory gone, the canopy trees grew better, so the forestry people were happy. “The woody understory was mostly exotics, little shrubby trees that came from elsewhere. Once they were gone, the nutrients were released into the soil, and the soil was exposed to more sunlight, the endemics came back. All these endemic herbaceous plants came out of the forest floor and with them came a very abundant insect community. So the environmentalists were happy, too."

The burn essentially gave the lizard the opportunity to move about. Templeton introduced the lizards on three glades in the Ozarks, and on their own, they've populated 140 more glades. While glade size important, equally important is orientation, as the lizards fare better in a glade facing southwest. "Our glade sizes varied from 498 square meters to 45,373 m^2," Templeton told ReptileChannel.  "Our paper gives the details on dispersal distances, with adult females generally going to the nearest glade, with an average of moving 147 meters. In contrast, hatchlings moved an average of 647 meters when they dispersed."  The population of the lizard on the glades varied, from 1 to 58 lizards, not counting hatchlings, with 12 lizards being the average.

The collared lizard grows to 10-16 inches in length. Its range includes Mexico and the southwestern U.S. and extends into the midwestern U.S. In addition to the glades of the Ozarks, it can be found in a range of conditions, from grassy meadows and hillsides to rocky outcroppings and deserts.