Check out the brown treesnake.

It is well known that the brown catsnake or brown treesnake has been introduced to Guam and caused an ecological catastrophe, the subject of an OBA film entitled “Snake Invasion”, but in New Guinea and the Solomons the snake is at equilibrium with prey, predators and the environment. The brown treesnake is primarily nocturnal with the vertically elliptical cat-like pupils typical of such snake worldwide. It has a large mouth and rear-fangs, and will bite with little provocation and bites have caused localized pain and swelling and more serious problems with babies. In New Guinea there are many more dangerous snakes that this and it does not feature highly in snakebite statistics. Highly agile and an excellent climber, the brown treesnake may be found almost anywhere and will feed on almost anything it can fit in its mouth. 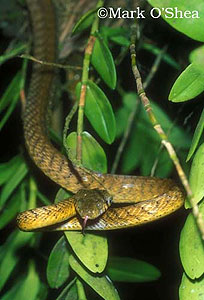 Brown treesnakes will eat almost anything it can fit into their mouths.