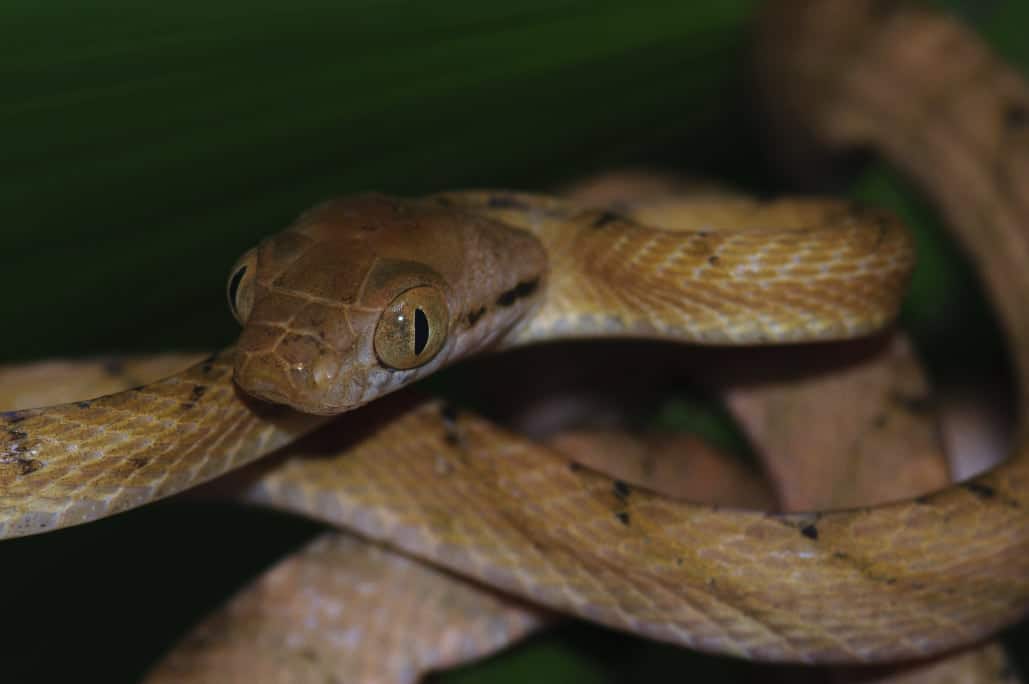 The brown tree snake (Boiga irregularis) on Guam uses a newly described mode of snake locomotion, or movement, that enables it to climb up smooth, cyl

The brown tree snake (Boiga irregularis) on Guam uses a newly described mode of snake locomotion, or movement, that enables it to climb up smooth, cylindrical surfaces. This mode, called lasso locomotion, gives the invasive species a new route to find and eat birds more effectively.

Julie Savidge, Thomas Seibert, and Martin Kastner, of the Department of Fish, Wildlife and Conservation Biology, Colorado State University, and Bruce C. Jayne of the Department of Biological Sciences at the University of Cincinnati, describe the movement in detail in their research paper, “Lasso locomotion expands the climbing repertoire of snakes,” which appears in the January 11, 2021 issue of Current Biology. The researchers note that over the last 100 years, snake locomotion had been categorized into four modes: rectilinear, lateral undulation, sidewinding, and concertina. These are just how snakes moved, until the description of lasso locomotion.

“The snakes climbed smooth, vertical cylinders (15–20 cm diameter) using a lasso-like body posture, in which the head and neck were oriented uphill of a posterior body loop that encircled and gripped the cylinder, the researchers wrote in their paper. “The body always crossed over itself at least once, but the exact body configuration in this region varied considerably. The ‘lasso locomotion’ used by brown treesnakes circumvents many functional challenges for gripping and climbing large vertical cylinders.”

The researchers note that this form of snake movement employed by the invasive brown tree snake enables them to exploit the resources on Guam, in this case the native bird species, that would not be more easily available to them if it were not for lasso locomotion. They say the knowledge gained from the study can be used to help protect native species as well as vulnerable infrastructure, such as the power poles that the reptiles often climb and disrupt.

The brown tree snake is an invasive species on Guam and is said to have made its way there by hitching a ride on an airplane or stowing away on a boat during World War II. It is native to northern Australia, New Guinea, and the Solomon Islands. It averages two to four feet in length, with the largest specimen captured on Guam measuring 10 feet.

The brown tree snake has caused all sorts of problems on Guam. In addition to effectively changing that island’s ecology, the snake has caused power failures and efforts to eradicate it have cost millions of dollars. The snake is responsible for the extinction of nine native forest birds on Guam and three lizard species. Other bird species on the island have been significantly impacted by this snake and certain sea bird species no longer nest there. With these birds removed from the ecosystem, the island’s spider populations have gone largely unchecked, according to a study published in the journal PLoS One.

The snake is a nocturnal, rear fanged venomous species of the family Colubridae. It can grow to about 10 feet in length. and feeds on lizards, rats, birds, shrews, and other small animals.