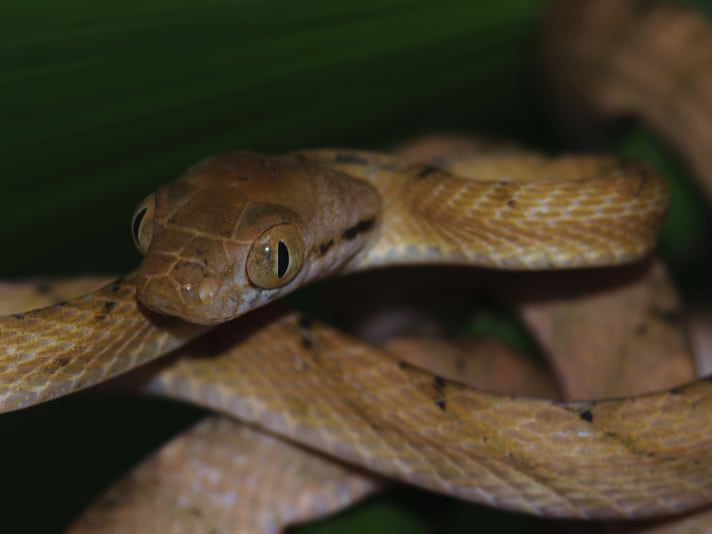 The brown tree snake has caused all sorts of problems on Guam. Photo by Mike Veitch/Shutterstock

The brown tree snake is native to the eastern northern coast of Australia and eastern Indonesia, Papua New Guinea and northwestern Melanesia.

The brown tree snake (Boiga irregularis), a reptile that has decimated Guam’s bird population and has created all sorts of mayhem on that island nation, has been found on the island of Rota in the the Northern Mariana Islands. A single specimen was found in a snake trap on Sept. 3. The male snake was 40 inches long and its body has since been sent to Guam where researchers will determine how long it had been in the trap.

In response to the finding, scientists are setting about 200 more traps throughout the island, which is in addition to the 46 traps that have been set for early detection. They are unsure if the snake is a lone specimen or there is an established population as there had only been unconfirmed sightings of brown tree snakes on the island. This marks the first confirmation that a brown tree snake was found on the island.

The brown tree snake has caused all sorts of problems on Guam. In addition to effectively changing that island nation’s ecology, the snake has caused power failures and efforts to eradicate it have cost millions of dollars. The snake is responsible for the extinction of nine native forest birds on Guam and three lizard species. Other bird species on the island have been significantly impacted by this snake and certain sea bird species no longer nest there.

The brown tree snake is native to the eastern northern coast of Australia and eastern Indonesia, Papua New Guinea and northwestern Melanesia. The snake is a nocturnal, rear fanged venomous species of the family Colubridae. It can grow to about nine feet in length. and feeds on lizards, rats, birds, shrews, and other small animals.