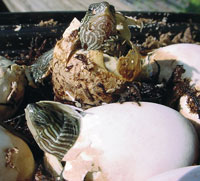 Courtship and breeding in the golden thread turtle (Ocadia sinensis) is fairly straightforward and occurs entirely underwater. The male often pursues the female from the rear, and he “sniffs” around her rear legs and tail while swimming along behind her. Then he approaches the female from the front, and he gapes and bites her into submission. He then mounts her from behind and continues to bite her face and neck throughout copulation. Courtship and breeding has been observed throughout the year, but activity peaks in very early spring and late fall. 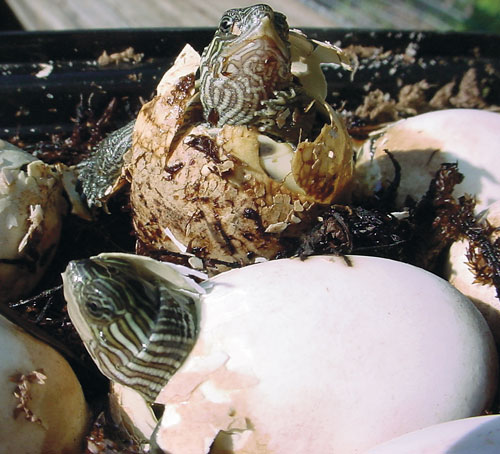 The striking beauty of these Ocadia sinensis hatchlings is typical of the species. They virtually glow like emeralds.

Female golden thread turtles are quite fecund, capable of producing up to four clutches per season. Clutch sizes range from four to 18 eggs, and clutch density decreases from the season’s first clutch to the last. This means more eggs are produced per clutch earlier in the season than toward the end. As might be expected, larger females produce larger clutches of larger eggs, but average egg size is roughly 1½ inches long by three-fourths inch wide. Eggshells are thin and brittle with a more flexible parchmentlike membrane beneath.

Eggs are produced throughout spring and summer, and golden thread turtles produce some of the earliest clutches of typical seasonal breeders. I have observed them nesting as early as mid-January and as late as June at my location in west-central Florida, but the majority of nesting occurs during March and April.

Although the sex of this species is presumably influenced by incubation temperature, a study is underway to verify this hypothesis. Hatching success is greatest when eggs are incubated at 82 to 88 degrees Fahrenheit and 80 percent relative humidity in damp sphagnum moss. It typically occurs after 55 to 75 days.