Breeding green anacondas (Eunectes murinus) has been accomplished in captivity with increasing regularity. There are even color mutations. Albino and axanthic specimens have been imported, and they may become available to hobbyists in the future. 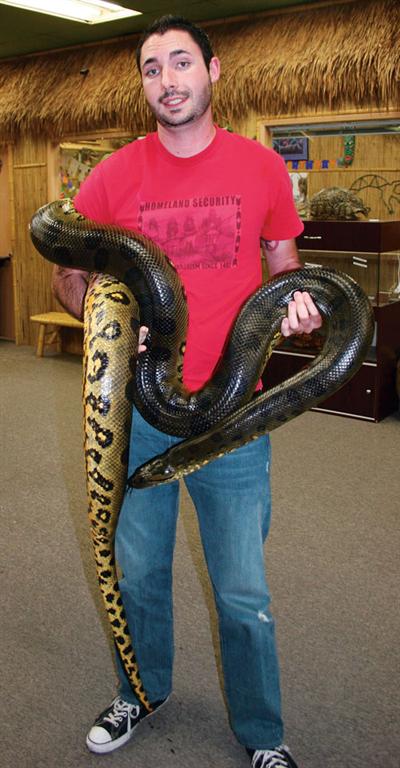 The author holds a green anaconda. Snakekeepers who wish to breed these snakes should have the help of a partner to do so safely.

Hybrids from breeding green and yellow anacondas to one another also exist. Some hybrids look more like yellow anacondas (E. notaeus); others look more like green anacondas. It seems to depend on which species was the mother. Hybrids are always fuel for a dispute in this industry, so if you decide to make hybrids, please be honest, and market your babies clearly as hybrids.

Anacondas are for advanced hobbyists only. Green anacondas, in particular, become very large and heavy. Once mature, they are difficult and potentially unsafe for a single individual to care for in a one-on-one setting. Having a friend or family member willing to assist with regular cage cleanings is a must. Eliminate undue risk whenever possible.

Once you have sufficient experience with these animals and the right assistance, start with two fully established animals of opposite sex. Make sure both animals are healthy and have good body weight before you consider breeding them. Also bear in mind that this species breeds in groups in the wild. Multiple males might court a single female. Captive anacondas will breed in one-male-to-one-female pairings, but results may fair better with several males being introduced to a reproductively active female.

Only feed two to three meals, if any, during this time. Be certain to feed smaller than normal meals if you are to offer food. Due to the lower temperatures, it is more difficult for the anaconda to digest its food.

Once completed, increase temperatures by 2 degrees a day until the normal ranges are attained. Daytime ambient temps should be between 80 and 82 degrees. The daytime hotspot should be between 88 and 92 degrees. Nighttime ambient temps should remain above 78 degrees, and the nighttime hotspot should remain above 84 degrees. Once the green anacondas are heated back up, offer as much food as they will eat.

A male can be introduced during the temperature cycling or after it. Rotating males alternately is advisable. If you’re confident in your abilities and will oversee the process, two or three males can be simultaneously introduced to one female. In most cases it is the male that should be introduced to the female’s enclosure.

Introduce males for 24 hours every seven days. Introductions during the cooling cycle and after it are generally good ideas. A male’s sperm is most viable under a threshold temperature. However, because the science of reptiles is still in its infancy, we do not know that exact temperature, so introductions under a range of temperatures is advisable.

When females return to normal temperatures, feed them a lot of food. If females are ready to breed, this will prompt them to produce follicles. Once the follicles develop and become ova, the female will ovulate, which looks like a large meal in her midsection. Look for distended skin and stretching between the scales.

Green anacondas are ovoviviparous, which means they give birth to live young. A gravid female produces a litter approximately 120 days after her post-ovulation shed. Litter sizes vary according to a female’s size, but an average litter ranges from 12 to 30 babies.

Newly born green anacondas generally shed five to 10 days after birth and then begin feeding on freshly weaned mice or small rat pups. Set up juveniles individually in shoebox-sized plastic containers with a 4-ounce water bowl, paper towel substrate and a tightfitting hide that gives the snake enough room to cover itself. Spray the paper towels lightly twice a week with tepid water, and provide the same temperatures as you would adults.

Some breeders keep young together in a 70-quart plastic container with a water bowl measuring 6 inches in diameter until they have had their first shed. This is an option, but housing them separately from the beginning allows you to inspect each baby for issues sooner than if you wait the five to 10 days for the animals to shed.