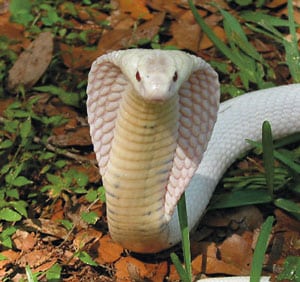 BREEDER COMMENTS: “The red-eyed, leucistic monocled cobra, aka ‘blizzard cobra,’ is produced when the genes from a leucistic (white with dark-blue eyes) and a sunset (T-positive orange with normal eye color) meet in the same animal. It’s striking to say the least. I believe there are only 11 so far in the world. I first produced them in 2003. They are not to be confused with the albino Suphan cobras, which have been offered in Germany.”