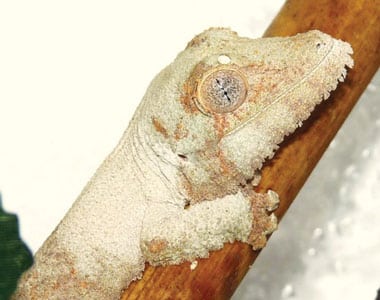 “In 2010, this highly pied female Uroplatus aff. henkeli hatched from a clutch laid by wild-caught adults. At just over a year and a half old, this gecko is 8 inches in total length and exhibits vivid white-and-pastel-pink markings. I look forward to her being ready to breed sometime next year. This was my first attempt at breeding this species, and I have had continued success producing exceptional pied and striped offspring. Uroplatus aff. henkeli differ in several ways from a standard henkeli, including size and tongue color (affs have pink tongues, whereas standards have black-tipped tongues). I hope to contribute to the growing captive-bred population of this unique species.”