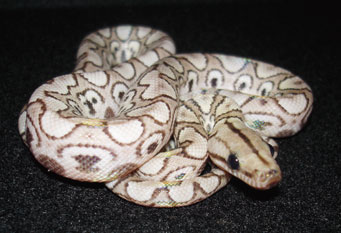 BREEDER COMMENTS: “This project began with the production of the first hypomelanistic Brazilians in 1994. In 2005 and 2006, hypomelanistic and anerythristic animals were crossed to produce two clutches of snakes that were thought to be heterozygous for both traits. In 2010, several pairs of double-hets were put together. On August 30, 2010, the world’s first ghost Brazilian rainbow boas were born. There were two females born to the same clutch.”