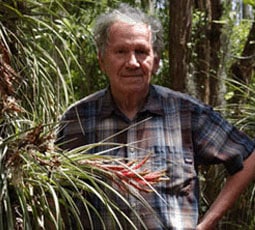 George W. Folkerts was born on November 26, 1938 and passed December 14, 2007 at his residence. He was a Professor in the Department of Biological Sciences at Auburn University for the past 38 years. He earned a B.A. degree in zoology and a M.A. degree in botany from Southern Illinois University and a Ph.D. in herpetology from Auburn University. During his career as a teacher and researcher, he studied every aspect of nature. His comprehensive knowledge of the plants, invertebrates and vertebrates inhabiting the southeastern United States was second to none, and he was a renowned expert in the ecology of disappearing habitat types and declining species. Folkerts’ passion for conserving nature made him a leader for local, state and national conservation efforts.

Part of his legacy for these efforts was his being honored by having multiple native species named after him, including most recently the Dwarf Blackbelly Salamander (Desmognathus folkertsi).

During his tenure as a faculty member at Auburn University, Folkerts was a dedicated teacher who loved teaching and was loved by his students. He won numerous teaching awards and exposed countless students to the wonders of the natural world both in the classroom and field.

Folkerts was kind to all who met him, generous with the time he offered to others, and humble despite his exceptional accomplishments. He had a magnetic personality that enlivened every gathering and made him a beloved member in the local community. He is survived by his loving wife, Debbie, his sister, Trudy, his daughters, Molly and Merrill, and his son, Evan.

In lieu of flowers, the family asks that memorials be made to Nature Conservation, or plant a native tree in memoriam.