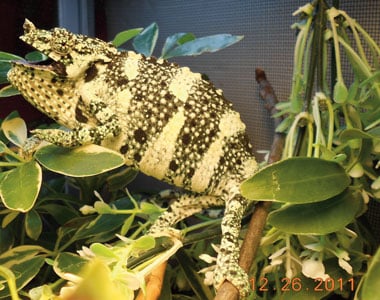 “The melleri chameleons have been my favorite species to work with since I started with chameleons, and they have also been my pet project for over 6 years now. After four different confirmed matings during the last four years, and as many clutches laid, I was finally successful in hatching them and raising healthy offspring.

Hatching began on July 25, 2011, and 42 hatched out of the 55 that were laid. Two of the prior clutches were infertile, and the third clutch had health issues as neonates due to the health of the mother. This clutch is one of the very few captive-bred clutches to exist in this country, and I look forward working with them further.”