Study of Dendroaspis polylepis venom could lead to painkillers that are as strong as morphine but without the respiratory distress associated with the painkiller.

While the black mamba (Dendroaspis polylepis) is one of the most venomous and deadly snakes in the world, its venom contains pain relieving compounds called mambalagins that are as strong as drugs such as the painkiller morphine, according to a report in National Geographic News. 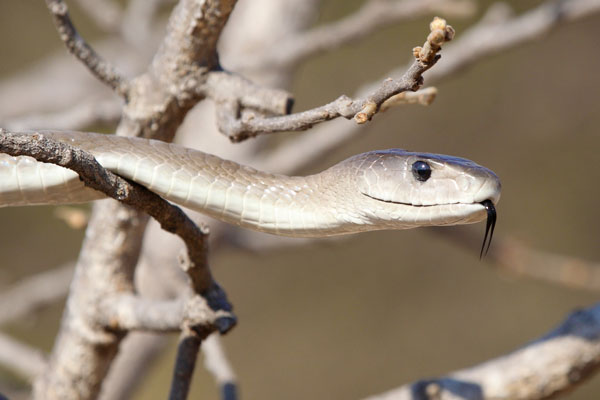 Black mamba venom has shown to have painkilling properties

Researchers with France's Institute of Molecular and Cellular Pharmacology isolated peptides from the venom of the black mamba, which they named mambalagins and tested the idea that these peptides can reduce or even stop pain completely when they are targeted at acid sensing ion channels in the central and peripheral nervous system of mice. When the test was conducted on mice, an analgesic effect occurred within the central and peripheral nervous system of the test subjects. The researchers say the effect can be as strong as morphine but without the respiratory distress associated with the pain killer.

Pain pathways are pretty well conserved between mice and humans, making us confident that these peptides will also be efficient in humans, Anne Baron, lead researcher of the study told National Geographic. It's remarkable that this was made possible from the deadly venom of one of the most venomous snakes, she said.

The next step is to advance the finding of this study to the clinical levels, and hopefully to develop a drug for human use. But this could take 10 to 15 years and hundreds of millions of dollars with no guarantee that any viable drug will come out of the development. A patent was issued, and the drug company Theralpa is working to create painkilling compounds, the report said.

Snake venom has figured in several medical studies over the last year, with the venom from the green mamba currently being studied at the Mayo Clinic to determine if it can be used as a heart treatment in humans, and viper venom showing the capability to reduce colorectal cancers in mice by 28 percent in a month in a Hong Kong study, and a British study showing that reptile venom can evolve into harmless compounds that could lead to new drugs.

The black mamba is so named because of the black coloration of its mouth lining, and not the color of its scales, which are olive brown to gray. These venomous snakes can grow to more than 10 feet in length, with the record being more than 14 feet. Its range includes central eastern Africa (Somalia and Ethiopia) to South Africa.