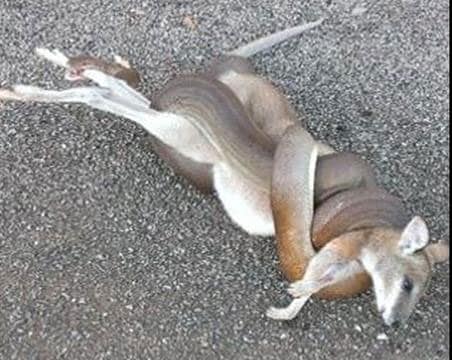 A dinner party in the Australia's Northern Territories was momentarily interrupted when guests arriving at the home of Pravina de Beer let it be known that a python was eating a kangaroo outside her door. According to NT News, the snake, which looks like an Australian olive python (Liasis olivaceus) had indeed had a marsupial in its clutches but the animal in question looked more like a wallaby, which can be found quite frequently in northern Australia.

The 25 guests already partaking in the farewell dinner went outside to witness the last breaths of the animal as the two meter long python began to eat it. The guests left the python to its meal at around 5 p.m. and less than four hours later, the snake was gone.

"I had some guests from New Zealand on holiday and they couldn't believe it," de Beer told NT News. She also told the paper that pythons are no strangers on her property, as one of her baby goats was eaten by a snake in 2013.

The olive python can grow to more than 12 feet in length and are olive, greenish brown in coloration with a white belly. They are popular with reptile keepers in most of Australia.