Aussie Scientists Attempt To Bring Extinct Frog Back To Life

The gastric brooding frog was declared extinct in 1983.

An extinct native Australian gastric brooding frog may be coming back to life thanks to the efforts of Australian scientists who have been working to revive the species for the last five years. The team of scientists, led by paleontologist Mike Archer of the University of New South Wales have successfully inserted DNA that came from a frozen specimen of the gastric brooding frog, which was declared extinct in 1983, into donor eggs from the great barred frog, a relative of the gastric brooding frog. To ensure the DNA of the great barred frog does not interfere with that of the extinct frog, the scientists were able to deactivate its DNA with UV light. 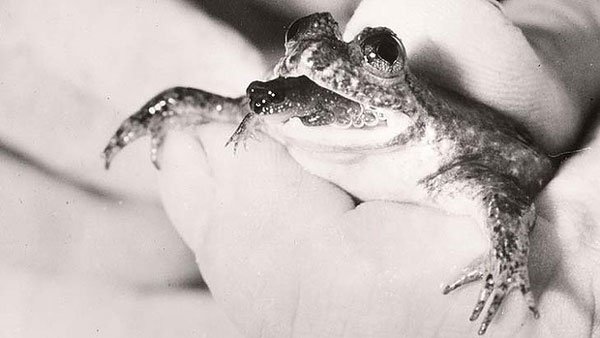 Southern gastric-brooding frog giving birth in the lab of Mike Tyler of the University of Adelaide.

In the beginning, the single cell eggs "just sat there," Professor Archer told The Sydney Morning Herald. "But then, all of a sudden, one of the cells divided, and then it divided again, and again. The embryos have not yet developed into tadpoles, but the researchers conducted genetic tests on them and determined that the DNA of the extinct frog is present in the dividing cells.

According to the paper, the experiment would have not occurred without the assistance Adelaide frog researcher Mike Tyler, who in 1983 froze a specimen of the extinct frog, and the fact that the university freezer in which the specimen remained for more than 30 years didn't experience a power failure. This enabled the researchers to extract viable DNA from the frog. The scientists hope that their research will help others to conserve the genomes of other species that are critically endangered.

Asian Frogs Are Going Extinct Faster Than They Can be Identified

Long-Fingered Frog Rediscovered After Disappearing More than 60 Years Ago