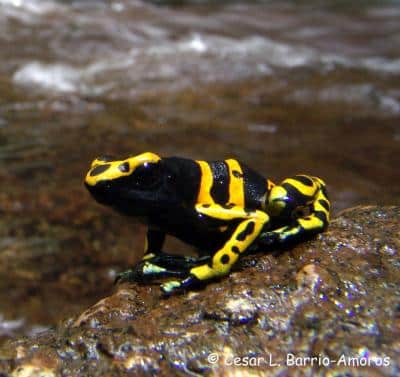 Fifty species of poison frogs given a frog fitness test.

Athletic frogs have faster changing genomes than more sedentary frogs, according to a study of poison frogs that was published April 10 in the journal Molecular Biology and Evolution.

In the study, author Juan C. Santos of the National Evolutionary Synthesis Center in Durham, North Carolina, gathered 500 poison frogs representing 50 species from the forests of Latin America and conducted a frog fitness test, including having the frogs run in a rotating plastic tube. He then measured the frog's oxygen uptake after four minutes of exercise. Santos determined that the more active frogs had aerobic capacities that were five times higher than more sedentary frogs and ran longer before they became tired.

This test, Santos said, caused the physically fit frogs to extract more oxygen from each breath, sending more oxygen to the working muscles of the frogs. He combined this data with a reconstructed poison frog family tree using DNA sequences from 15 frog genes to determine how the species' genome changed over time. He then estimated the changes in DNA for each species over time and found that athletic frogs had faster changing genomes.

Why would physical activity contribute to faster changing genomes in the frogs? That question remains unanswered, but Santos believes that less active tissues in the body suffer from a lack of blood and oxygen during physical activity. When physical activity stops, the number of harmful molecules, called free radicals, increases in the body, which can cause damage to the DNA. This then can cause genetic changes that can possibly be passed on to future generations.