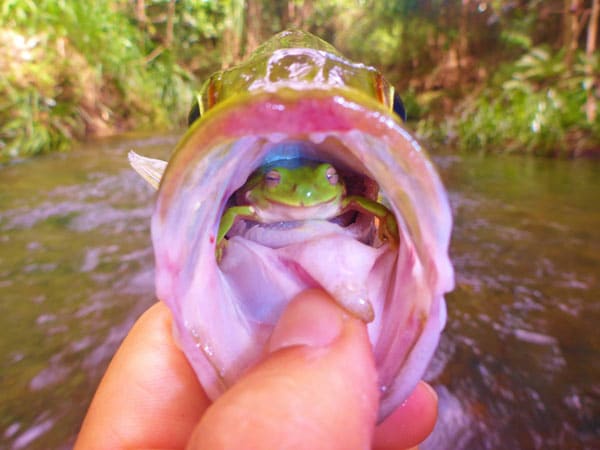 Australian angler Angus James was about to release the jungle perch when he noticed a live green treefrog in its mouth.

A good post on the REPTILES Facebook page can generate a few hundred likes. A great post? More than 1,000. An exceptional post goes Richter! This happened with the posting of a picture of an Australian jungle perch with a green treefrog (Litoria caerulea) in its mouth sent in by Angus James of Townsville, Far North Queensland, Australia. The image went viral on the REPTILES Facebook page, generating more than 5 million views in less than a week. It currently has more than 83,000 likes, close to 50,000 shares and more than 4,500 comments. 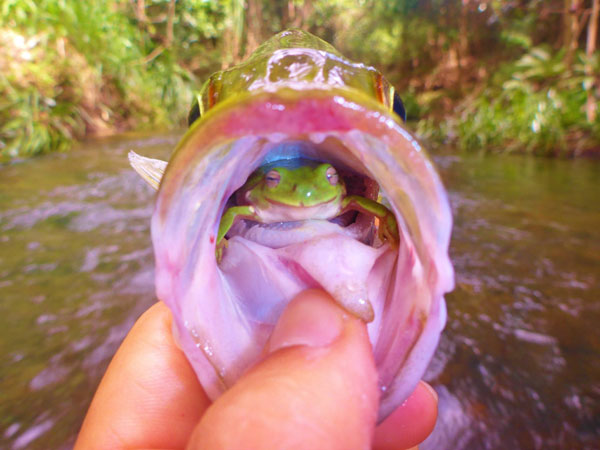 Australian angler Angus James was about to release the jungle perch when he noticed a live green treefrog in its mouth.

"I was fishing in one of my favorite rain forest streams in Far North Queensland Australia, when I cast my Zman soft plastic lure into a dark shaded area," James told REPTILES magazine Editor Russ Case, who posted the photo on the magazine’s Facebook page. "It was soon crunched by a nice-sized jungle perch, and as I was pulling my lure from the fish prior to releasing it back into the water, I noticed two little eyes looking back at me from inside the fish’s mouth! After capturing this picture, the little green treefrog leaped straight past my head onto the nearest tree. It was one of the coolest things I have seen in my life—this was one lucky frog!"

The frog was lucky indeed. Green treefrogs are one of 63 frogs listed as occurring in Australia's Far North. The are also known as the dumpy frog, northern green treefrog , and White's treefrog . They grow to about 4 inches in length and are capable of changing their color depending on environmental conditions.