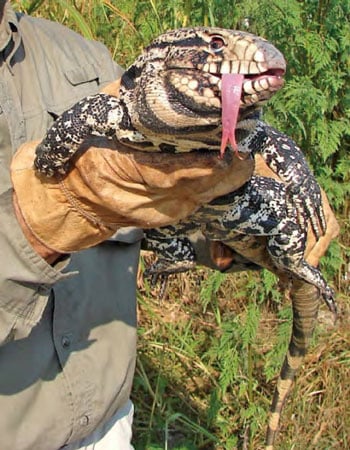 Argentine Tegus On The Loose In Florida Town

Former resident of Panama City apparently released them into the wild and skipped town.

The Florida Fish and Wildlife Conservation Commission is asking residents of Panama City to be on the look out for large Argentine black and white tegus (Tupinambis merianae ) that were apparently released by a previous resident who had a Class III license to sell the lizards. According to the FWC news release, staff had already captured 33 of the 3 to 4 feet long lizards, with several weighing as much as 30 pounds. The release did not state how many of the lizards were abandoned, but most were found in a fenced-in yard. 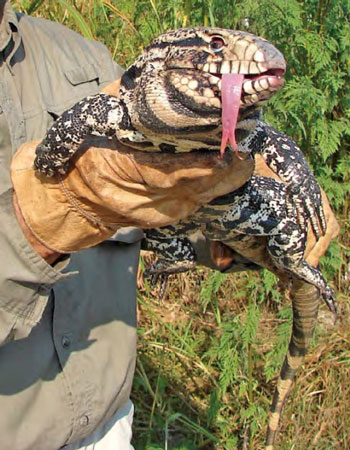 "A previous resident in the area had a Class III license, which allowed him to sell tegus,” FWC Investigator Jerry Shores said in a news release put out by the FWC. "That person left town and abandoned the tegus, which has prompted a criminal investigation. During the investigation, the current residents have been nothing but helpful.”

The FWC is asking anyone who spots one to contact the exotic species hotline at 888-IveGot1 (888-483-4681) or report it online at www.IveGot1.org. Photographs of the animal and their location are also important to the FWC in capturing all the animals.

Argentine tegus are large lizards that are native to the South American countries of Brazil, Paraguay, Uruguay and Argentina. They are omnivores and will eat fruits and vegetables as well as rodents and other small animals.