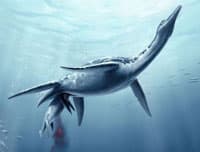 The Plesiosaurs, a marine reptile that swam the world's oceans more than 75 million years ago gave birth to live young and perhaps swam in groups much like dolphins and whales, according to a study published in the journal Science. Paleontologists F. Robin O'Keefe of Marshall University in Huntington, W.Va., and Luis Chiappe, the director of the Dinosaur Institute at the National History Museum in Los Angeles joined forces to study a fossil of a Plesiosaurs mother with what appeared to be an unborn Plesiosaurs still inside her. 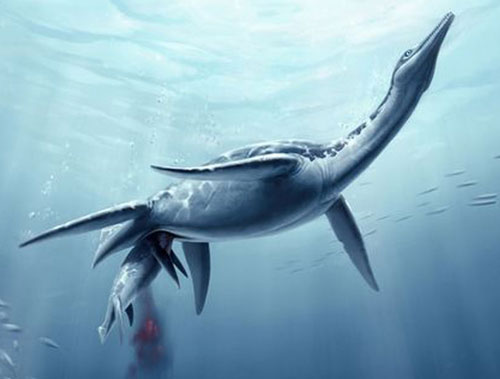 According to a Los Angeles Times report, the fossil was discovered in 1987 by a father/son team of amateur paleontologists in Kansas. The duo, Marion and Charles Bonner sent the remains (which included the pelvis, ribs, hips, spinal column, four flippers, and portions of the neck), to the Natural History Museum in Los Angeles for further study. It wasn't until 2008 when the fossils were scrutinized. The scientists located the miniature bones near the abdomen of the adult Plesiosaurs. They concluded that the bones were of the same species and then interpreted the find to be a mother Plesiosaurs with an unborn baby growing inside, the report said.

They then concluded, based on the size of the unborn Plesiosaurs, and the way in which the mother gave birth, to live, and probably singular young, that the reptiles were social, like that of dolphins and whales and gathered in groups to help protect their young from predators.
The fossil is currently on display at the Los Angeles National History Museum's Dinosaur Hall

The study was published August 11, 2011 in the journal Science.