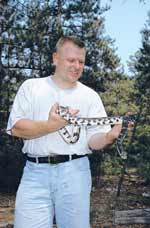 An overview of reptile taxonomy.

How To Raise Your Own Fruit Flies
Joining A Herpetology/Reptile Club
Herp Queries: A Career in Herp Photography

"Morelia viridis? That looks like a green tree python to me."

"I thought they were Chondropython viridis."

"A few years ago they were."

"Why did they change the name?"

Because the 1993 article by Arnold Kluge in the Records of the Australian Museum: Supplement 19 is not easy to come by, you may wonder the same thing. Conversations similar to this one can be heard at herp shows and in chat rooms all over the world. So who makes these name changes, and why do they do it?

Using my favorite snakes – the genus Elaphe – as examples, I will provide a simplified explanation of taxonomy and explain how and why the names of our favorite reptiles keep changing.

Taxonomy is the classification of living organisms based on their evolutionary relationships to each other. The first goal in humanity's quest to catalog and name all living things was to devise a naming system that would reflect the relationship between organisms. The first highly successful method was devised by Carolus Linnaeus in the mid-1700s, and this is the method that is still in use today.

Linnaeus devised a hierarchical system of classification. In this system, all life is classified into a series of categories or "taxa" (plural of taxon).

These taxa, in descending series from most inclusive to least inclusive, are as follows:

Genus and species are the last two taxa, and they are the ones most commonly used in publications (including REPTILES magazine). Genera (plural of genus) separate the ratsnakes (Elaphe) from the kingsnakes (Lampropeltis). Species separate cornsnakes (Elaphe guttata) from Baird's ratsnakes (Elaphe bairdi).

When writing genus and species names, the genus name is capitalized, and both are written in italics. Taxonomists also use suborders, superorders, subfamilies, superfamilies and a few other distinctive taxa to further divide groups, but the seven major ones mentioned here are those most frequently encountered.

When taxonomists first began to define relationships between and within taxa, they used the tools that were available to them at the time. These included rulers and calipers to measure features and simple descriptions of outward appearance, such as pattern, scale counts and layout, head shape and body shape. Other measurements include the shape of certain bones and the presence of internal structures. Habitat and behavior could be included in a species description, but many of the first species collected (some well over 100 years ago) were shipped to museums in pickling jars and only had a locality to describe them.

Recently, taxonomists have been using molecular techniques to answer taxonomic questions. Instead of looking at morphological features, they are looking at proteins and DNA.

These comparisons are done using two methods. The first is to compare between species the exact nucleotide sequence of a gene and base the species' evolutionary relationship on the similarity of the sequence. The more different the two sequences, the further apart evolutionarily the two species are.

Another common molecular method is to run protein enzymes through a semisolid matrix made of starch (similar to a tray of Jell-O) by "pushing" them with an electric current. This is called allozyme or isoenzyme analysis. If two proteins are essentially the same between two species, they will migrate the same distance through the matrix. If they're different, they will migrate different distances.

By comparing a number of these proteins between species, a data set can be created and comparisons made. The more proteins two species have in common, the more similar the two species are.

What Is DNA? The design of every living creature is written in its DNA (which stands for deoxyribonucleic acid). The DNA in our bodies is stored in two ways: in our two sets of chromosomes (one from each parent) or on a very small circular piece of DNA called mitochondrial DNA, which we inherit only from our mothers. 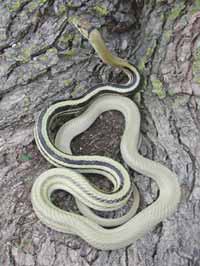 The "biological species concept" defines species as groups of naturally reporducing populations that are reproductively isolated from other populations. This is a radiated ratsnake (Coelognathus radiatus).

Both morphological and molecular techniques generate sets of data for each organism being studied. These data sets represent the characteristics of the organism, and from them a phylogenetic tree can be created.

A phylogenetic tree is a graphic way to portray similarities or differences between organisms. A tree is built by taking a data set (morphological or molecular) and analyzing it using a computer program designed to interpret the data. These programs compare sets to create a number matrix. The trees are then created using the numbers, with the pairs of organisms with the highest numbers being the most alike and thus the closest "branches" on the tree. Eventually, a phylogenetic tree that represents the possible evolutionary relationships is created.

What Is a Species?

The "biological species concept" is the most commonly used criteria for defining what is a species. This concept defines species as groups of naturally reproducing populations that are reproductively isolated from other populations. This means that populations which make up a species do not interbreed with other populations of a different species. This isolation may be due to geographical isolation (caused by a river or mountain range, for instance) or physiological isolation (the two species have overlapping ranges but either do not recognize each other's reproductive cues or simply reproduce at different times of the year).

Taxonomists will probably continue to debate this issue unless an intergrade population at a naturally occurring overlap is found. 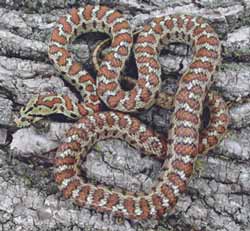 Taxonomists choose a name based on a set of rules governed by the International Commision on Zoological Nomenclature (ICZN). Pictured is a leopard ratsnake, formerly Elaphe situla, now Zamenis situla.

How Are Taxonomic Names Chosen?

Taxonomists choose a name based on a set of rules governed by the International Commission on Zoological Nomenclature (ICZN). When a taxonomist discovers a new species, it is usually placed into whatever genus it most closely resembles. It is then given a Latin name that usually describes its characteristics.

These synonyms must be considered when changing a name, and the oldest valid synonym should be used. Thus, when Notker Helfenberger's research showed that the ladder ratsnake (Elaphe scalaris) was not closely related to other Elaphe species, he consulted the literature and found that it was first described as Coluber scalaris. But it was clearly not a racer like those in the genus Coluber. The next valid genus name describing the same snake was Rhinechis scalaris, and this being the oldest valid name, it became the new name for the ladder ratsnake.

When name changes are proposed, taxonomists should be able to find the original specimen (called the "type specimen") preserved in a museum or university collection (which is why maintaining collections is important) to make sure they are dealing with the same species. Also, taxonomists cannot name new species after themselves, but another taxonomist can name it after them. 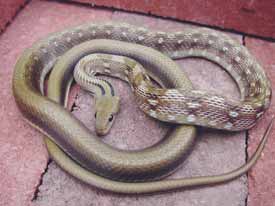 Notker Helfenberger found that a group of Elaphe species formed a separate group on most phylogenetic trees that he constructed. This resulted in some new classifcations, including the Ceylon trinket snake being renamed Coelognathus helena.

However, neither method of publication ensures that a name change will be accepted. 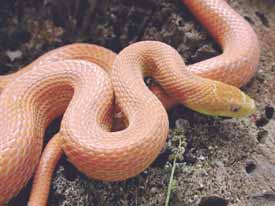 This Everglades ratsnake was formerly Elaphe obsoleta rossalleni and is now Pantherophis alleganiensis with no current subspecies status.

Let's examine some specific revisions that have taken place within the genus Elaphe.

Ratsnakes comprise a group of highly variable Old World and New World snakes. Because ratsnakes in the genus Elaphe can be so different, most herpetologists believed that as soon as they were extensively studied that their names would change. Indeed, that seems to be the case.

One proposed change is the revision of the Elaphe obsoleta complex. Frank Burbrink (now an assistant professor at the College of Staten Island/CUNY) and coworkers at Louisiana State University gathered specimens of all of the subspecies of black ratsnake, including the gray ratsnake (Elaphe obsoleta spiloides), the Texas ratsnake (E. o. linheimeri), the yellow ratsnake (E. o. quadravittata) and the Everglades ratsnake (E. o. rossalleni).

Using mitochondrial DNA sequences to create his data set, Burbrink found that instead of sorting according to subspecies, Elaphe obsoleta could be sorted into three very clear groups that were divided by geographic boundaries. The divisions that were created using molecular data were not contradicted by morphological data in a later paper by Burbrink, so three new species designations were proposed.

The name Elaphe obsoleta was proposed for snakes found west of the Mississippi River, because the type specimen (the first specimen to be described with that name) was from Iowa. The proposed common name for this snake is the western ratsnake.

Another recent reclassification of the Asian and European ratsnakes occurred when Helfenberger used morphological techniques, as well as allozyme analysis, to construct phylogenetic trees to reclassify some of the ratsnakes into new genera.

The example of the ladder ratsnake was given earlier. Among Helfenberger's other changes is a new genus for Elaphe rufodorsata (it is frequently sold in pet stores by the common name of "Chinese cornsnake"). It looks like a ratsnake, but eats fish, is semiaquatic and retains its eggs, giving live birth.

The taxonomic data showing that E. rufodorsata was different from other Elaphe fit with the ecological data. Therefore, it was placed into a new genus called Oocatochus (which roughly translates from the Greek as "egg-retaining"). The full name is Oocatochus rufodorsatus.

Helfenberger also found that another group of Elaphe species formed a separate group in most phylogenetic trees that he constructed. This group included, among others, the Ceylon trinket snake (formerly Elaphe helena), the radiated ratsnake (formerly E. radiata) and the black-copper ratsnake or yellow-striped ratsnake (formerly E. flavolineata). These snakes have been removed from the genus Elaphe, and the synonym Coelognathus (first used to describe the radiated ratsnake in 1843) has been elevated from a synonym to a valid genus. The new names for these snakes are now Coelognathus helena, C. radiatus and C. flavolineatus, respectively.

More than half of the other genus names of Old World Elaphe were changed again in an article by Utiger and coworkers in 2002. New genus names include Zamenis, Euprepiophus, Oreophis and Orthriophis. It will take time and debate before these name changes come into common usage, and there is no guarantee that they will.

Who knows how many more changes will take place between this writing and publication of this article?

We are handed down name changes made by taxonomists, which can take a small population of a widely available species and immediately classify it as an endangered subspecies. The snakes would be no different than they were before, but the taxonomic reclassification could lead to conservational reclassification and make the snakes unavailable.

It often seems that these changes are made arbitrarily to confound us, but I hope that this article has given some insight as to how and why these changes take place. Concerning the changes cited here: Only time will tell whether or not they will be accepted by the scientific community.

Dr. Shawn Lockhart has been keeping reptiles and amphibians for as long as he can remember. His lifelong fascination with color and pattern mutations in animals led to his earning a Ph.D. in genetics.  His current interests include the mechanisms behind color and pattern mutations in snakes and the evolution of the rat snake complex. He is the owner of Hawkeye Herps.

*This article first appeared in the July 2004 issue of Reptiles magazine.*