Besides many similarities, fieldherping in Arizona also has many differences compared to pursuing that pastime in Florida. Certain of them would be obvious to a blind person, but others take living there to really notice and sink in mentally. Here are some that stand out that are noteworthy: 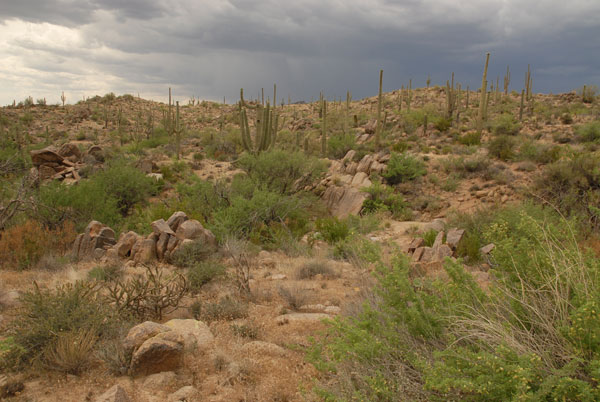 Arizona is both beautiful and challenging for the experienced herper.

1. It’s much hotter and drier here over the summer, and the seasons are more differentiated. Duhhh, you say? Understanding the whys and whens of how it affects activity patterns of herps increases encounters exponentially.

2. Rain is a key consideration in encouraging herp movement. When it rains, they come out from the innumerable holes and crevices where they’ve been secreted, conserving their moisture. The trouble is, it hardly ever rains in the desert, especially during the past several parched years of 2009 – 2011. When it does, get out there on foot, by car or however to see what’s come out! Take care after light rains that form a slick layer of mud on dirt road surfaces that can send you sliding when hitting the brakes.

3. Carry plenty of drinks when out exploring. Dehydration sneaks up much faster out west.

4. Fieldherpers make up a higher percentage of the herper population in Arizona. They are more secretive and protective about locations where they find herps – understandably so!

5. Cactus spines are everywhere in the gravelly desert soil. My knees and elbows take a constant beating during photo sessions afield while getting down for low-angle images.