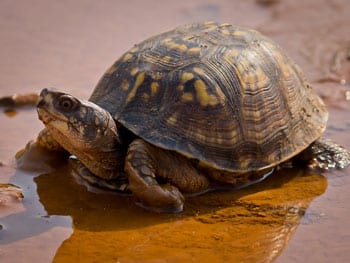 4th Of July Turtle Race To Go On In Bel Air, Maryland

The city's Independence Day organizers will reassess if a turtle race will be held in 2014.

A 4th of July turtle race will go on this year in Bel Air, MD. despite a letter from the Center for Biological Diversity asking the event organizers to cancel the race. The conservation group sent a letter to the event's sponsor, citing the potential for spreading the ranavirus disease among turtles and salmonella among those who handle the turtles during the race. According to a report in the Baltimore Sun, Collette Adkins Giese, a biologist and attorney at the Center said the virus was detected last year in Harford County and she has fears it could spread.

"Turtle races strain native turtle populations that are already under terrible pressure from habitat loss, road kill and other threats,” Collette Adkins Giese, the Center’s biologist and attorney said in a press release put out by the Center. "Of course, Bel Air doesn’t want to harm turtles or kids. Once they understand the risks, I’m hopeful that they’ll skip the turtle race.”

Adkins Giese also noted that a sick box turtle was brought to an animal hospital in the county and tested positive for ranavirus. But show organizers said that the turtle race will go on as planned this year, but will have discussions whether to hold the race in 2014. The city's turtle derby and frog jumping contests have been staples of the town's annual Independence Day celebration for decades, Don Stewart, the show's president and chairman told the paper, and to stop the turtle derby now would require the event's organizers to fill the time slot with another event, which they said would be difficult so late in the game. The organizers told the paper that the Center had discussions with them about six months ago but only received a letter asking them to stop the race on June 28, less than a week before the 4th of July. More than 150 entrants are scheduled to race their wild-caught turtles on the 4th of July.

Maryland law prohibits the collection of the following wild turtles; spotted turtles (Clemmys guttata), wood turtles (Glyptemys (Clemmys) insculpta) or diamondback terrapins (Malaclemys terrapin), or the possession of more than one of eastern box turtles (Terrapene carolina), painted turtles (Chrysemys picta) or many other turtle species that can be found in the state.